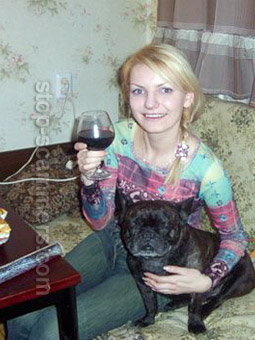 REPORT N1 (added on August, 23, 2005)
James (USA)
My experience was very similar to many that I've read since discovering this site.
She fell in love immediately.
She became desperate to visit.
She asked for money to pay for a plane ticket.
REPORT N2 (added on August, 23, 2005)
John (USA)
She has been emailing and requesting money from me to come abroad, I wish have stop emailing me.
REPORT N3 (added on September, 1, 2005)
James (USA)
My experience was the same.
She fell in love immediately.
She became desperate to visit.
She asked for money to pay for a plane ticket.
REPORT N4 (added on September, 8, 2005)
Wayne (USA)
This girl wrote to me for about 6 weeks almost every day. Then she said she had visa and wanted to come see me. She even scanned her visa and sent it to me, but she needed money to buy the airline ticket. Luckily, Western Union refused to send the money to her, then I found out about this site and saw her picture on it.
REPORT N5 (added on September, 8, 2005)
Gary (USA)
My experiences mirror those of the other two reported contacts with Katy. The letters are exactly the same; the photos match perfectly. She wanted money from me to travel to DC this September, and I set up a trial ballon via Western Union. She's blocked from receiving money, and
she's been making the rounds with other men. Caveat emptor!
REPORT N6 (added on September, 28, 2005)
Louie (USA)
I received the same letters (word for word) as the previous 3 guys. She's supposedly in love after a couple of e-mails and eventually asks for money for a plane ticket. I hope noone got taken by her...
REPORT N7 (added on June, 24, 2019)
Jon (USA)
Claims to be lonely and abused by Russian men. She writes nearly every day and her English is much better than most. This one takes her time trying to win over her victim's confidence. She waits about 3 weeks before announcing that she's fallen in love, then another 2-3 weeks before she tries to scam for plane fare the US. At one point she sent me a ****** fantasy that was obviously written by someone else because the English was much better than hers. As 'proof'
of her sincerity she sent a photograph of a US tourist visa with her picture and name on it.
I was already suspicious and forwarded it to the US Embassy in Moscow - they quickly confirmed by return email that the visa was a forgery.
After that I just strung her along, dangling the prospect of sending her money but inventing lots of reasons for delays, just to annoy her. I recommend this strategy to all guys who think they are dealing with a
scammer: they're all trying to get you to wire them cash by Western Union, so dangle the carrot in front of them and keep them thinking they're just about to score. At first she asked for $1000 and when I balked at sending that amount she offered to settle for a special half-price 'scammer's discount' of $500 instead.
Her end game is actually very clumsy and full of mistakes and contradictions. She told me she went to the WU office in Satka (where she claimed to live) for instructions about wiring cash to Russia, and just a few lines later told me that there was no WU office in Satka so I should send it to Ufa instead (about 60 km away from Satka). My guess is that she actually lives in Ufa. Each time she asked for the 'plane fare' I reminded her that her tourist visa was a fake & she would never get on a plane with it. She simply ignored this contradiction and continually asked for the half-price plane fare. I tried to get her to send me $100 dollars first as a gesture of trust, but was not successful. Eventually she realized she wasn't going to be able to scam me & announced she was breaking up with me because "we have no future together".
I sent her a final email telling her exactly what she was (a liar and thief) and how I was on to her almost from the beginning.

It's me Katy! Wayne I hope you glad to get this message from me. I am always glad when I get a message from you. Today is hot sunny day again. In the night I have heard a rain behind the window, but in the morning we have a clear sky again. I like when the sky is clear, but thunderstorms - not lesser. It is pleased to me to hear thunder and to watch for a heavy rain. In the moments when the thunder is clattering and the nature is raging with all of her splendor, I feel myself like a little bug. I love to go to the street during the rain and walk barefoot under the rain on the street. Do you like it Wayne, do you like thunderstorm? I like to feel the perception of cool water when I walk on puddles when the drops fall down on my hair and my body. Ok, enough of lyrics (smile). But all that words about thunderstorm was truth. Wayne I want to let you know about my interests and hobbies. I am trying to live healthy and very active life and in last time my activity became ******. I like play and watch sport, especially tennis, badminton, volleyball, beach volleyball and water sports. By the way Wayne do you know that in Canada right now goes by the championship of water sports. When I have free time I watch it on tv. Do you watch it too? Also I like to ride on a bike, rollerblading, skiing and skating. Sometimes, usually 3 times a week in the morning I am jogging. In the summer or in the warm weather I go to river or lake for swimming and
Read more