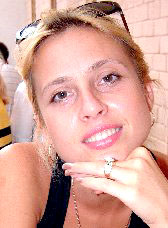 REPORT N1
David (USA)
I found her on the Absolute Agency web site. We corresponded and I began sending her money. I went to the Ukraine and we met as required for the Fiance visa. The visa was granted and I went to Warsaw to pick her up in May. We were married in Houston, TX, in June. Six weeks into the marriage she went back to the Ukraine saying she was homesick and depressed. We continued to correspond and, at her request, I began work on a K3 visa.
I found an ad for her on Russian dating agency pages and questioned her about it. She said a friend had placed it and then she took one off at my request. However, I found another ad recently and questioned her again. She gave me the same story, but the ad didn't come down. I now realize how foolish I was in persuing this situation.
At that point, I hired a detective agency in the Ukraine to check her out. I received the report telling me that she had no intention of coming back to be with me. I also found out that she was living with a guy in Cherkassy and spends time on his computer apparently seeking other men who will send her money as I did.