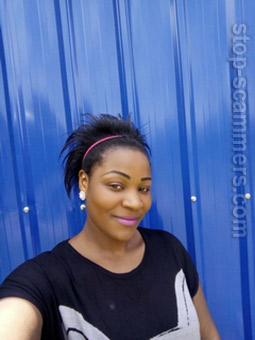 REPORT N1 (added on March, 23, 2018)
John (Brazil)
Monica first contacted me there and told me that her "heart had spoken" Lol. She asked me to contact her at Whatsapp which I did. We started to chat at 08.56 am and despite several long breaks by 5.59 pm she had decided that I was her man and she was in love with me.
We conversed more and her English language leaves a lot to be desired but in fact her mistakes can be quite funny. For instance she went into full details of how her husband had beat her with a wooden stave until her Virginia had bled and she lost the child she was carrying, She then went on to talk about the Farting site where she had found me. It appears that the sexual relations continued with her husband as she soon became pregnant again.
I asked Monica for personal sexy photos and she obliged without problems, telling me that she had not had sexual relations for 6 years and that she wanted them with me. I noticed that in her pussy pic she has a clitoris piercing, I asked her if it hurt and she told me 'No, not at all', her puss must be as tough as old boots, lol.
At one stage of our conversations she told me that if she could not have me she would kill her son and herself, bit drastic I thought considering she had only known me for a couple of days.
We chatted for several days intermittently due to problems with my internet. In one of our conversations she told me that her young son had fever and she had to buy medicines for him which she was unable to do as her business was bad. I guessed where this was leading to and in our next conversation she told me that he had been hospitalized with some horrible African disease that I have never heard of and she needed 6000.00 Kenyan shillings for treatment for him, she said she only had 2000.00 shillings and didn't know what to do. I asked for his full name and the address and mail address of the hospital where he was interned so I could try and help. She wouldn't give me any of this information no matter how I tried. She told me that her son has Rotta's Virus and that she was visiting him and feeding him porridge. I checked with an African Medical friend (also a scammer, but very intelligent) who is based on the border of Uganda and Kenya and she tells me that Rotta's virus is a highly contagious and terminal illness, if the boy had it he would be in an Isolation Hospital with no visitors and the Government would pay for all of his medicines.
The amount she asked me for was about $50.00 and as soon as she realizes that I wasn't going to send it the boy suddenly got better, was discharged from hospital and our conversations became fewer, I pushed her for more sexy pics but it seemed that her love for me had died, lol.

Romance scam letter(s) from Monica Tug to John (Brazil)
hi John how are you, am new here and your the first man I saw and like I would like to have a chart with you, I know this is weird but I let my heart speaks, my what'ssupp number are +254717101106 ,looking forward to hear from you thanks

Hello my love, how are you doing? Hope all is well with you cause today i didn't see you online, i just want to take this chance to thank you for understanding me and to accept and love me the way I a
Read more