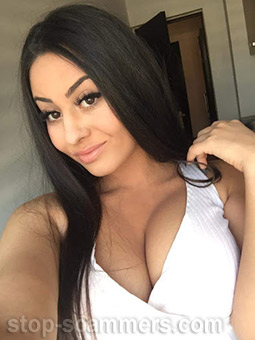 REPORT N1 (added on April, 13, 2018)
Phil (England)
I feel very sad to write this report as it concerns a young lady who has made a disaster of her life, she is a scammer however so it is my duty to report it.
It concerns Mary Ojere a 27 years old Nigerian girl who was a Mingle 2 client and at her profile says that she is from Paris, Arkansas, USA. She is actually Nigerian, of mixed blood, ***** and white parents. Somehow she fell into the trap of making a pornographic film in which she starred. There is just this one film on the internet and still photos on the net are taken from this film. All of the photos that she sent barring two are actual photos of her, Mary Ojere. I also had a short video chat with the young lady which is attached within the evidence. I say 'chat' but it was just film as we had no volume at either end. Mary contacted me at Mingle and asked for my mail and hangouts address which I gave her, we began to chat and it was the normal scammer chat that I get into with other scammers, I had no idea that she was genuine and I thought her photos were as usual, stolen.
During our chats we discussed as to whether she would be interested in coming to live with me in Brazil and the reply that she gave me was positive. She asked me to cancel my account at Mingle and told me that she had already done so and sent me a copy of her exit from that site.
Up to this point we had very little or none ****** innovations in out chats when all of a sudden she asked me if I masturbated. I told her that I did and she replied that she didn't as it left her feeling ***** and she could not complete her ****** alone, she needed a man with her. During this stage of our conversations she told me that her net was expiring and she asked me to send her $50.00 by Western Union, she had WUs address at hand and sent it to me immediately. Mary also gave me her real address to send the cash to.
This sudden turn in our conversation gave me the opportunity to ask her for a couple of **** photos which she agreed to send immediately. Up to this point I had searched all photos that she sent me with a negative result at Google, Yandex and Tin eye images.
The pics arrived and were two close ups allegedly of Mary's ******. Searches on these two photos came up immediately one being a Chinese girl and the other European.
I complained to Mary telling her that I knew these photos were false, she apologized and within minutes she sent me a real photo of her kneeling on the bed and exposing her ******. It was obvious that this photo was a still from a film so I searched and found it at a site called Adult Forum and a couple of small sites affiliated to Adult Forum, there as I have said are the film and stills taken from it. There is no trace of Mary anywhere else on the internet.
I asked Mary for more photos and at this stage she became very agitated and told me that I was just like all other men, she then abandoned me.
I really genuinely feel so sad for this young lady.

Emails from Mary Ojere to Phil (England)
i am very easy to get along with .....I love reading,listening to music,like action comedy movies,love meeting people far or near, i love been with friend and going out for camping and most of all been close to the nature.. i am a God fearing woman

hello, how are you, let have a little conversation if you are really looking for serious relationship text me on (334) 439-0472 and my hangout is maryojere0009@gmail.com

good u can email me on marry.marry_j@yahoo.com and my hangout is maryojere0009@gmail.com