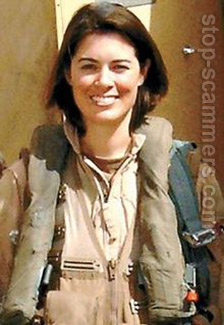 REPORT N1 (added on April, 16, 2018)
Phil (England)
My favourite scammer so far!
Nicole Malachowski at Singles Dating World is using stolen photos and the name of the real Nicole Malachowski who is a very famous American pilot with The USAF Demonstration Squadron.
In her first message to me at SDW it is very apparent that her knowledge of the English language is disgraceful and is hardly that of such an esteemed intelligent lady hero.
At this point I wish to point out that I am not the pervert that you think I am, I just get great fun out pushing these *** holes to the limit, lol, especially when they steal photos of the famous. I wanted to see just how far she would go so I told her that I wasn't interested unless we got ******, I said that I had a really bad experience with my last wife and was not about to repeat it. I also told her that I had a small fortune tucked away.
She had told me the usual story about her millions that her and her friends had managed to take from a terrorist organization. I suggested that our joint cash could be a great asset and make a wonderful future for us together. She fell for it and false documents, words of love, photos of her private parts and explanations of how she liked her *** began to flow to me, she even told that she masturbated regularly since the death of her husband, ****. Her private parts photos were stolen from the **** pages, but she chose a **** star that resembled her very well.
I downloaded a photo of an extremely well hung guy and sent it to her but she never mentioned it so I guess the scammer felt humble and inadequate, lol.
She had sent me photos of her with the highest echelons of the American Government, even up to the great President Obama, God, they would have been vexed to read and see what she sent to me.
The next explicit photo that she sent me was of another **** star. I then really pushed my luck and asked her to make a clip, at this time she was probably trying to work out a way to get into the London bank account that I had told her about and I felt she would do anything to keep me happy. At last I received a letter from her Bank man, Mr Henry Cooper (she deserves eight rounds in the ring with him) and the man asked me for my bank details including account number.
I still pushed her for the film clip but all she would send were another half a dozen photos Russian **** star, I then blocked her.
Created: 2018-04-16    Last updated: 2018-04-16    Views: 1699