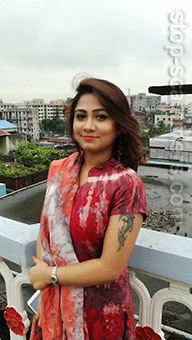 Emails from Mariama Abdel to Brad (France)
Hello lovely one,

how are you doing today ? i hope you are in good health. I am happy that you contacted me here. I am very glad that we both have interest in each other, and I do believe that we both have to be open-heated and sincere so as to know each other deep down and well, share our loneliness and love together. I'm happy writing to you now, and i really need to build a strong foundation for friendship and love with trust. It takes communication, trust, understanding, and forgiveness because we are only human. Mistakes will be made, misunderstandings will occur, but if the foundation is strong enough the relationship will overcome those barriers. so let me tell you more about my self.

My name is Mariama Abdel, i am from Libya, in Northern Africa. I am 24 years old, but age doesn't matter in a real relationship, I am from Libya, 5.2ft tall, little fair in complexion, single, never married and presently i am residing here in Dakar as a result of the war that happened in my country, which was the reason i escaped to this country, Senegal, where i am under refugee camp.

My late father is Major General Abdel Fattah Younes. He held the rank of Major General and the post of Minister of Interior, but resigned on 22nd February 2011 to defect the rebels in Libyan civil war. My father was killed by members of anti-Gaddafi military on 29th July 2011. When the rebels (anti-Gaddafi militaries) attacked our house one early morning killed my f
Read more