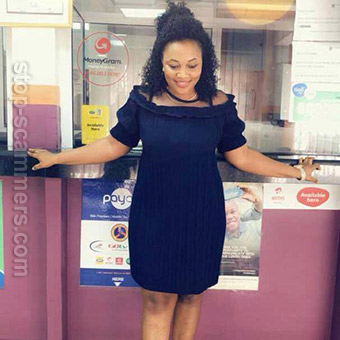 REPORT N1 (added on May, 30, 2018)
Phil (England)
Deals with Phyllis Mc Liana Lonix (good old Irish name that for a Ghanaian) who contacted me at whatsapp with just the usual 'Hi'. I asked where she knew me from and the following points made me suspect that she was a scammer.
1. Phyllis told me that I had given her my whatsapp phone number at Mingle 2 dating site, this was highly likely but I certainly didn't give my number to anyone named Phyllis, it is my 3rd wife's name and I would have remembered. I retain my contacts for one month at these sites before deleting them because of no further contact, so she was definitely there under a different name and I could not tie her photo into anyone at Mingle 2.
2. Phyllis began to flood me with her photos telling me she had hundreds, almost all of her pics were taken by a third person, even when I asked her to take a pic for me again most were taken by someone else.
3. During our first conversations she told me that she lived with her older sister and that they didn't have a television to watch at home, poverty chat from the start like other scammers.
4. Early in our conversations she told me that she would like to come to Brazil to meet me.
We conversed freely and I asked her about her experiences at the site, she told me that she had chatted with many men there which would explain the amount of time that she had taken to contact me, either this was the reason or she purposely delayed contact to avoid anyone reporting her profile as that of a scammer. Phyllis also told me that she hadn't conversed intimately with her other contacts as she was chatting with me.
Phyllis and I chatted several times by video call at whatsapp and I asked her to tape a video of her chatting to me which she immediately did.
Phyllis is a very beautiful woman, extremely beautiful in my humble opinion and intelligent; she works in some kind of banking firm.
Phyllis and I also chatted by gmail, the longer messages that I have trouble typing with one finger on my phone, lol.
I sent her a mail and she replied at whatsapp saying that she couldn't read it until she went to her office as her phone didn't have her mail address, she suggested that I buy her a laptop so we could chat when she was at home. I told her that if we got on well I would and then dropped the subject.
I hinged on *** chat and then quickly apologized and tried to change the subject but Phyllis suggested that we should talk about *** as we needed to know all about each other. I asked her if she liked **** movies and she told me that her friends send them to her and yes, she did like them, they turned her on! She immediately sent me a long **** movie that commenced with a clothed massage and ended in full blown **** *** of all types. I am unable to attach this film, far too big.
I told Phyllis that I would like to see her **** and that evening she sent me two photos, the first of her ****** and the second of her ******. I asked for more and she told me to wait a few minutes. She then sent me two short clips of her ************. Phyllis apologized for the fact that her ****** wasn't shaved but told me she would shave it that day as she was a lady, she would then send me more photos. This lovely looking woman is a real *** full of *** as well, lol.
Earlier that same day Phyllis had told me that she having her finger and toe nails painted, I immediately asked her to take a pic of feet and fingers which she did, seems irrelevant but later that day when she sent me the photo and films of her ************ it is clear that they are the same nails so the photos and film are definitely of her.
At some time during our **** chat she again asked if I would buy her a laptop.
I avoided lots of chat for several days and she resumed texting with me and immediately asked when I would send her the cash for her laptop, I asked if she had a bank account and she said 'yes' but she would rather receive it by Western Union or Moneygram.
I tried very hard to get her account details but there was no way that she would divulge them too me.
I pushed Phyllis for more **** pics and she kept promising to take and send them but at the end of each day there was an excuse from her and an apology.
Now bored I dispensed with her.

Mail has been received and acknowledged. so sorry about what happened especially with you girlfriend. I am very ok and fine since you've told me the truth about yourself.

I would like to get along with you my dear. I pray one day you will take me fishing since I have never gone fishing before and that makes you happy.

I will send you pictures as requested but on what's app. Nice pictures you've got anyway.

I'm Sorry for replying late. I have been busy at work. Let me know when you are less busy tomorrow so I tell you about myself.