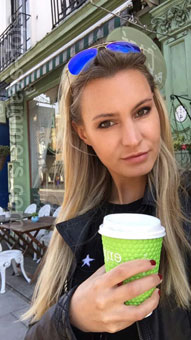 REPORT N1 (added on August, 9, 2018)
Krijn (Belgium)
This girl is back on the same website as I just find out, I let her know that I discovered that I found out that she is using the pictures of a girl called Doreen Seidel, which is a German car racer and ******* model.
She told me she was born in Germany from a German father and English mother and lived in Germany until her father died at her age of 10 years, after that moved to England and grew up there until now and claimed to be living in London.
Eventueel she will tell you see needs to go to Kuala Lumpur, cos her mother is there in the hospital. She will from then on generate over and over again pitiful excuses to ask you for money. In my case the money transfer would not even release the money to her, probably cos she is already listed as a scammer to them, for that she will give a name of which might be her lover/accomplice Jeff Manson to send the money 2, he being the husband of the house maid of her mother, that in our communication died in the hospital .
I am sure she is going to die again for her new victim.
Recently this girl broke her neck in a car accident.
with me she worked with a English telephone number, which she only uses through WhatsApp .
She claims that her camera is broken so you will never she her in real.
Created: 2018-08-09    Last updated: 2021-07-26    Views: 1943