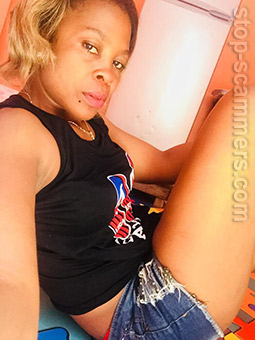 REPORT N1 (added on October, 19, 2018)
Phil (England)
Difficult to work out the modus operandi of this lady. She is a Mingle 2 client who uses a very old photo of herself as her profile pic. She says that she is in Senegal and whenever someone contacts me from that country I am immediately 99% that I am dealing with a scammer. However, apart from the normal "Mum and Dad are both dead" there was no refugee or I have an ISIS fortune claim, only the fact that her Father owned properties in France.
I genuinely believe that she started our friendship with ideas of a scam and then thought that she had found a nice guy that would look after her for the rest of her life and dispense her from the scamming business. Retirement with a sugar Daddy.
Sadly for her she lied to me from the beginning, lied with her first gmail. I wrote to her telling her that she had left her mail address for me at Mingle and my mailtrack told me that she read it within seconds of me sending it, the next day in the late afternoon I received a mail from her apologizing for not replying earlier as she had only just received my mail. (LIE ONE) She began to send me photos of herself in which she appears very much older that her profile photo at Mingle. I ran checks at Google and Yandex which proved negative apart from her Mingle profile and another at Topface in which she calls herself Lee.
I asked her for personal intimate pics hoping that she would steal a photo from the net that I could identify, she ignored my request, she was quite willing however to chat *** with me.
She more or less convinced me that I should go to Senegal so that we could share our lives together, I said that I would and sent her flight times and hotels in Senegal, I also asked her to send me more photos which she did.
She sent me three more photos and told me I would need to buy her a camera as she was using a friend's phone and the friend wasn't very happy about this.
In the three photos that she had allegedly just taken she is in three different modes of dress and her hair colour is completely different, lol. (LIE TWO) In a nutshell the evidence is, she changed her name twice to me, first she was Fattima then Barbara and she has another profile at Topface in the name of Lee. She like other scammers is orphaned but Daddy left properties in France. She lied to me twice.
Third lie is that she uses a Cyber cafE to mail me, Mailtrack tells me that she is using Windows 7, that went out years ago, Cyber cafE's keep up to date.
Since I began to write this report I kept in touch and she has just now shown her true colours after I told her that we were moving too fast and I wouldn't go to Senegal till later. She has just asked me to send her $300.00 to buy a phone+ some extra for a hair do so she can look beautiful in the exotic photos she wants to send me.
I rest my case.
Created: 2018-10-19    Last updated: 2018-10-19    Views: 1694