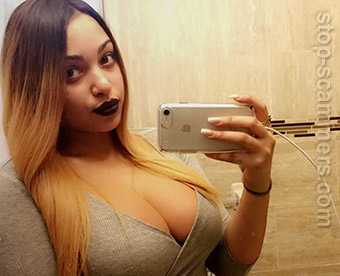 REPORT N1 (added on October, 31, 2018)
Phil (England)
I found her photo at Pictogram, she has hundreds there. She is using the same name as at the site but there Queen Janelle.
She was difficult, just mundane questions and answers from her but was obviously scamming as no woman with her looks would want an old *** like me. She didn't ask me for any photos but said that she wanted to come to me in Brazil, lol, she hadn't even seen me at this stage. I still had no proof that she was scamming so I asked her if she had children, she said that she didn't. I again checked her Pictogram page and it appeared that she was very close to two kids there, still no absolute proof though.
I found a really dreadful photo of me which looked as though I had used the same embalmer as Prince Philip and sent it to her, this drew no response except to tell me that it was her birthday soon. The mundane **** chat continued until eventually she asked me to help her celebrate her birthday, she told me that she would not ask me for money and in the same breath asked how much I would send to her as if it wasn't enough she would add to the amount. I told her I would send her a $1000.00 by computer transfer but she told me to send it by WU. I asked her to send me a ***** pic which she did without argument. The rest of her chat speaks for itself.
She asked me to send by Western Union to her brother at ;
Shennall Alford, Collingwood, New Jersey, 08107.
Created: 2018-10-31    Last updated: 2018-10-31    Views: 1892