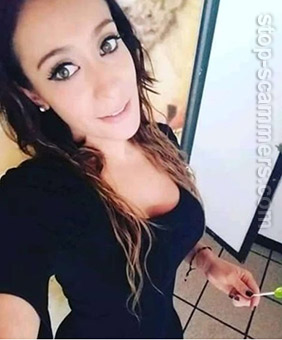 REPORT N1 (added on November, 2, 2018)
Phil (England)
I first became a little suspicious of this lady calling herself Alexis Naiome at Tender as the photo was of a porn star who when dying of some horribly disgusting sexually transmitted disease many years ago hung herself. I marked her up as a favorite and she made contact with me there. She asked for my hangouts address which I gave her and she messaged me there.
(Hangouts 1)
I sent her my usual pre written spiel and at that stage she dropped a bombshell on me, she told me that she had been using her friend Alex's photo and name because of a husband problem. All this time I thought that I had been communicating with a dead lady which would have been a first for me. She told me her name was Beatrice and sent me photos of a very well known scammer who has more identities on the internet than one can find in a telephone book. Now I was sure that something fishy was going on. She also gave me a new hangouts address and asked me to add her there.
(Hangouts 2)
We began to chat and she told me all the usual crap that scammers write about what they want in a man. She then began to ask me questions all of which I had given answers in my stock into letter, this pissed me off and I told her so. I then told her that I wasn't happy with her as she hadn't read my letters at all. I ceased to communicate with Beatrice at this stage.
(Hangouts 3)
The next day I received a new hangouts request from Alexis, now Alexis Brooklyne, lol. I replied and she denied all knowledge of anyone names Beatrice, she sent me half a dozen new photos of the dead porn star and asked me about my past again, I couldn't be bothered with this again, told her I thought she was a fraud and blocked her.
Oh what a tangled web we weave when first we practice to deceive.