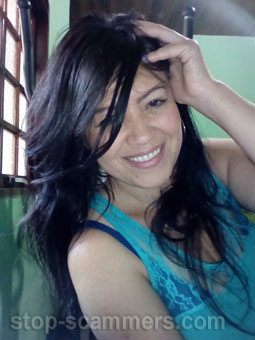 REPORT N1 (added on December, 3, 2018)
Josh (USA)
Asking money, promising ****** service. Her story to me is that she listening music much,and spending money for internet phone bills. She sent me this music and said that downloading of this music much money costs and that I must to listen that music . Probably because I should pay phone bills.
REPORT N2 (added on May, 29, 2020)
Anthony (USA)
This woman is scamming me and asking money. Also.she threatened to **** me if i don't give her money that she needs. Everything started with simple conversation on Badoo dating site and then when i met many people there that she scamming too same like me i decided to report her. If someone don't knows, first thing that is she doing is online *** via Whatsapp or Facebook messenger,after this she asking money to come in your country(because *** is much easier in live,not online) and if she don't cheat you for airplane ticket or passport money and come,then she calling you to come in Brazil and after this she always asking money and threatening because she knows some politicians(as she say,but i dont believe), i was a fool and i was going in Brazil,she stolen everything from me,she took all my money and credit cards and this wasn't enough to her,she continued to call me,in times when i was alone because my wife died she had online *** with me but she always asked for some small ammount of money. Last week she wanted me to send to her 12 000 USD but i dont have so much money. Police can't protect me and i can only write my experience here so everyone that knows her,dont making contact with scammer. i sent report here but i havent placed report well and nothing happened with that report. I know that there are many single men who were cheated ,especialy devorced or widdowed,but only that i can do is to write to stop scammers.
REPORT N3 (added on October, 29, 2021)
Anthony (Canada)
I met her on Badoo,she promised me marriage i just had to bring her money when I come at her house. But when I told that i won't have that much money 5000 $, she get angry,she started to sending official messages because she's afraid that someone spying her phone,and she started writing to me like I'm scamming her and not conversely,and she started to send voice messages about that she doesn't want me to come,but while we was every day in video call she was talking everything good about marriage,living together. Then she get really really angry and she sent me some virus or something like that via WhatsApp.
Created: 2018-12-02    Last updated: 2022-05-13    Views: 2298