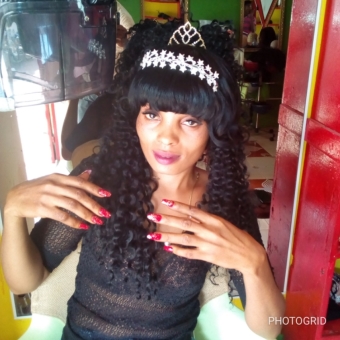 REPORT N1 (added on December, 17, 2018)
Phil (England)
Report deals with Mariam Neh a Sierra Leonean girl aged 26 years who tells me that she is visiting her Aunt in Banjul, Gambia.
Very clever this one, contacted me at Tender Dating site and as soon as we made contact deleted her profile there. She asked for my whatsapp address and contacted me there. I asked for photos and she flooded me with them. She told me that she was unemployed and wanted a job, I offered to help as I have contacts in Sierra Leone, she accepted my offer and I made enquiries with a Company there. I needed to know her qualifications and she told me that she had never worked and had no trade as such.
Mariam would put nothing in writing that could reveal her as a scammer, she called me by video and phone many times and I told her that I could not hear her clearly which was true.
The work help offer was over. We got onto a little *** chat and she told me that she is Muslim but not a ******. The next day she told me she was in love with me and wanted me for real, she went on to say that internet time was expensive in Gambia, she was using a restaurant that had free wifi.
She made it apparent that she wanted me to buy air time for her and when I didn't offer she ignored me for several days.
I then received a video from her showing her appalling living conditions, in the video she was crying and making sobbing noises.
The next day she called me again saying that she needed $1500.00 or $2000.00 to get her out of trouble.
I tried again without success to get her to put this in writing, no success.
She then told me that her landlord had evicted her and she had nowhere to live.
I offered to help and told her to find a cheap hotel, get the landlords mail address and I would pay him by internet, she sent pics back of a beautiful house and said the landlords details would follow later. I then received a further mail from her asking would I prefer her to find a cheap room.
I offered to go to Gambia telling her that if I went I would want us to sleep together, she said this was no problem and would meet me at the airport.
I have no concrete evidence that Mariam is a scammer as she is very clever even to the extent of deleting her voice messages to me as soon as I have had time to read them.
This girl who says she is destitute changes her whatsapp profile photo daily, the last photo before I blocked her shows that she has a lovely cellphone, not cheap!
I leave it to your experienced eyes!
Created: 2018-12-17    Last updated: 2019-01-11    Views: 1761