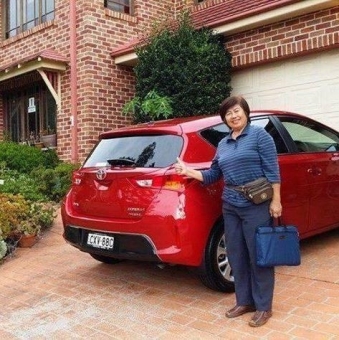 REPORT N1 (added on January, 14, 2019)
Brad (Canada)
New scammer.
REPORT N2 (added on January, 14, 2019)
Phil (England)
Report deals with Suzi Williams who contacted me at my gmail and asked to be my friend. I replied to her and received a message telling me that she was in hospital dying and that she would like me to handle her will, a trifle sum of 2 million Euros, being British and still using Pounds Sterling I rejected her offer, lol.

Emails from Aslimah Ahmed Ibrahim Sherab to Brad (Canada)
How are you my dear ?
Thank you for your reply to my email on Facebook , it is my pleasure to meet you, how are you. sorry I did not write the language well because i am still learning the language.let me introduce myself briefly.

I am Mrs. Aslimah Ahmed Ibrahim Sherab, from Indonesia but my husband is an Iraqi from Ramadi in Al Anbar Governorate, and we live in the UK, I lost my husband on August 16, 2016. While I was struggling with illness cancer for a long time and my doctor said that the current situation is not under control that I have a few more months to live. Well my husband is a contract and before his death he secure and complete a contract work with the UK government value

but death took him away before the money is deposited into my bank account, my husband is a philanthropist, before his death, he encouraged me to help the poor, because since we got married, we were unable to have children. And due to the condition of my health which is deteriorating everyday and I don`t want the bank to share the fund between their selves, I sent two million dollars to my home town (Indonesia) and $ 200,000.00 was sent to the hospital for my medical treatment, I will love to send the remaining $1.500.000:00 million dollars to you so that you will help me to give it to the poor nations and the widows there in your country under the designation of my late husband since we do not have any children to inherit thi
Read more

Emails from Aslimah Ahmed Ibrahim Sherab to Phil (England)
how are you today hope everything is fine and OK with you as it is my great pleasure to contact you in having communication with you starting from today, I was just going through the Internet search when I found your email address, I want to make a new and special friend, so I decided to contact you to see how we can make it work if we can. Please I wish you will have the desire with me so that we can get to know each other better and see what happens in future.

My name is Suzi Williams, I will be happy to see your reply for us to know each other better and give you my pictures and details about me.

Thanks for your response. I am from Thailand but my husband is from Hanoi a French Citizen but we both live in Jakarta Indonesia before he died. I lost my husband on a plane crash on May 19, 2016. meanwhile i have been struggling with cancer for long time and my doctor said that the present stage is uncontrollable now and I have a few months more to live

Yes that's how i see it, listen before the death of my husband, he work a construction contract with the Spain government worth of 4.7 million Euro, but death took him away. He deposited two million Euro of the money in a Spain bank where he won the construction contract of which he gave me the details of the deposit before he died. My husband was a philanthropist before his death, he also encouraged me to help poor peoples, because since we got married we have no
Read more