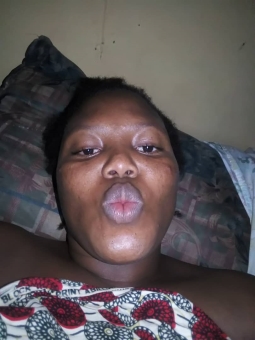 REPORT N1 (added on January, 21, 2019)
Phil (England)
Angela contacted me at Devoted and was very careful checking me out for days before she asked me to contact her at whatsapp. We began to chat at whatsapp and she told me she was a widow and that she had an 11 month old daughter named Flourish. This was where she made her first mistake telling me that the girl's father died two years ago. During our first chats she told me that she was a schoolteacher and she didn't do **** pics on the internet, she said that people who did that were irresponsible. Later when money was involved she became very irresponsible, lol. She called me many times with video chats and began to tell me that she was hungry and later that she was ill with appendicitis. She didn't have money for medical treatment. She asked me for the equivalent of $400.00 in her local currency and kept asking me to contact her brother who earned little but took care of her and her daughter. I never spoke with this guy. All through our conversations she told me that she loved me so now that cash was involved I asked her to video call me and show me herself ***** to prove her love for me. She was very hesitant to do this but when she eventually did from her face she was really enjoying displaying herself. I don't know why because her ******* were enormous and hung down to her waist, horrible sight, lol. During the video chat I told her that I had no sound at her end, I lied, and I could clearly hear a man prompting her. The film was dark and I told her that I couldn't see her ****** properly, I asked her for a close up ***** photo which she took and sent me, the photo was genuine in comparisons of earlier photos she sent me during that chat session. The fingers and nails are the same.
She asked me to transfer the cash direct to her bank account and as soon as I had her bank details I blocked her at whatsapp.
Within half an hour I received a facebook friend request from one Vanessa Oriakhi. It was Angel using a different name. At her facebook she describes herself as The Reverend Lucy Natasha. The profile photo at Devoted is of this lady. As you will see from her facebook she is also scamming there.
Close up photos that sent me of her face are distorted but it is definitely her as in our video chats she showed me the child who is half cast and could not possibly be mistaken.
Naughty vicar this one, chatting ***** on video and dropping her ******* to take an intimate pic for me.
She also has a second profile at Devoted in the name of Nana Yaa from Kumasi, Ghana according to Yandex, I believe that this info is incorrect however.
Created: 2019-01-21    Last updated: 2019-01-21    Views: 1458