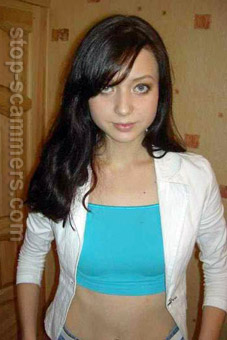 REPORT N1 (added on September, 28, 2005)
Sean (Canada)
She contacted me via lemontonic. Her profile said nothing. Her letters talked about leaving russia and her mother. I was on my guard and asked for proof. She send me a fake passport pic. I confronted her and she stopped writting. I guess eventually her mother would get sick and she would need money.

Emails from Marina Demina to Sean (Canada)
Hi my dear.
I am glad nevertheless that you have written me the letter.
ÉÞ you already know me call Marina. And I live in Russia in city Vladimir.
Why you have decided that I not the real girl. If I am beautiful that I can not find the real love under the Internet.
I have addressed in agency because I do not want to live in Russia and I done not interested with young people in Russia.
And they are not ready to serious attitudes.
I would like to live outside Russia, I would like to live better than in Russia. I shall have the best life in other country.
And consequently I have addressed in agency.
And in a structure I have written that I from USA as I had problems at registration and consequently I have put this country, in it I do not see that suspicious.
If you do not trust in real love on correspondence why you ÍÀÏÞÐÕÊÕÝ in agency and there were registered?
Marina.

Hello the my dear friend!
Many thanks to you, that you have answered me, and have shown interest to me, it is very pleasant.
As you already know me, call Marina, and I live in Russia. The city in which I live, refers to as Vladimir, is not far from Moscow.
It is rather small city, but beautiful enough which is in the Moscow area.
I 25 years am old, and I was never married. I long enough am in loneliness.
To tell the truth, when I have seen your questionnaire at once has decided to write.
Though I cert
Read more