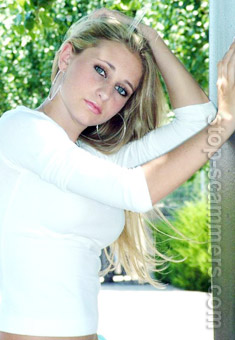 REPORT N1 (added on October, 5, 2005)
Bruce (Canada)
I found her on Yahoo Singles Canadian website. I sent her an email asking her to be friends and she replied back. We started emailing each other. She claims to be born in Canada and her mother is half Nigerian and half Austrian. Her dad and mother fell in love somewhere in Europe. She
said that her dad died when she was 17 and then she and her mother had to move to Nigeria where they have a clothing store. She was now planning on returning back to Canada next month (Oct 2005). She sent me pictures of
herself and pictures of her passport. She looks very beautiful however the funny thing is in her passport, her name was "Sarah Martin" and not Lisa Marson??? Later she had her travel agent send me her flight intinerary and
then she needed money to make the final payment to the travel agent. I asked her how much and how I could send it and she provided a name Mark Moore at address 23 Opebi Road Ikeja, Lagos, Nigeria 023401 to sent the money only using Western Union.
I got a bit suspicious and I found this site. In this site I found a profile with the exact same story but under a different name with different pictures. The name in the other profile is Linda Gerald. Aka: Anna Richards; Angela Raye.
Be careful guys!!!
REPORT N2 (added on January, 31, 2007)
Michael (USA)
Dinah contacted me from yahoo personal. Over 4 months of sending her money thru Weatern Union and direct deposit $3,000. I was alerted by WU that she was on a dating fraud watch list. When I told her she protested that it was the wrong idenity. I offered to straightened it out for her by sending WU her birth bert and passprot. I haven't heard from her since.
REPORT N3 (added on March, 15, 2007)
Chris (USA)
Hilda Smith is very sharp. She fell in love with me fast, but worked me in a very seductive way. We wrote to each other for about six weeks, and I fell for her scam and sent her 1500.00 USD I had her travel agency she was working with send me copies of all the documents, and they looked ligit to me. I checked with the Embassy in Ghana, a lady by the name of Tracy Marsh, and she confirmed my worst fears, fake passort, fake visa, and so on. She is still active, using many different email addresses, most appear on match.com. She gives her location in many parts of the world, some as far away as New Zealand, but mostly in Africa, Kenya and Ghana. I will forward you any documents and relative info via numerous emails.
REPORT N4 (added on September, 4, 2007)
Brett (USA)
Known Nigerian scammer.
REPORT N5 (added on November, 20, 2007)
Gerrie (South Africa)
She produces a questionnaire and does not answer to specific questions. Her writing style between her profile and first reply differed extensively. She did not respond when I challenged her intentions of being fraudulent. Obviously someone managed to get pictures of the girl and uses it to create a fraudulent identity.
REPORT N6 (added on August, 29, 2011)
Stefan (Sweden)
Kerstin, I had contact with her, it has sent money for a passport visa flygblijett. 2000 euros would come to Sweden 25 May but was stopped at customs when she tried to smuggle 15 kg of gold ended up in jail would be cashed out with 10,000 euros unless it would be in prison. then next week she would fly to Sweden but became ill at the airport was operating the cecum, but after two days she was worse when it turned out it was cancer of the liver opeartion + 5 weeks in hospital cost 8000 euros then she told me that her cousin helped her sell 20 kg of gold to the us but it would cost 40,000 euros to send when I get paid this, there were new charges of tax attorney 7000 euros. since it has been spending the suitcases of clothes a week at the hotel food for himself and mother.
so in total I have sent 85 000 euros to this bedragerska.
WARNING FOR THIS NICE GIRL.

Emails from Lisa Marson to Bruce (Canada)
Hi Dear....
How are you doing today?... i hope you are doing just fine and good at the moment....well i must say i got your email and you really sounded so nice and very much interesting to me ...well i think you made many points about the fact of life and i think they are all right and correct cos i must say you say all that out of the heart.
Well dear if you care to know some fact about me here they are...... i was born there in Canada and if you really do care to know.... my mom is a half Nigerian and half Austrian...my dad met her when he went to austria for some trip and let me say business then they started from there and became lovers ..... and they both came down together to the Uk where they had me as thier first child and only child before dad died..... i grew up there in docksland school for some time .... till i was 17 when my dad died everything was not so easy for me and mom we both had to get back to nigeria where she had some relative who really do care much about her..... we are at the moment but shall be getting back to the Canada before the end of next month and nothing will be able to stop me from getting back execp for the lord.
Well i am a very new person on this computer and this dating thing but i learn and know that it has brought many souls and couples together who are living happily together now... it also happened to this my very friend who introduced me to try this online dating that it will definately work for me just like
Read more

Emails from Lisa Marson to Michael (USA)
hello honey
hope you are diong great just i am also faring honey,i have read the mail and i really understand you so much. dear this is the birth cert and and i promise to send you the passport copy so you can feel free in mind.as i said like i wanted to finish with the visa before i send that to you but as you have said i will send it to you when i scan it so please be expecting that from me and i also want us to move forward as you said. so honey i am online earl and it seems you are not email me when you recive this mail.have a nice time and take every good care of your self. Dinag

hello
Honey how are you doing and hope all is well with you? Well this is the pictures dear it unfortunate that some of the pictures were not clear and this is what i got when they got the film developed. Well it because I was not use to the camera but any way this is also much and I hope you will be very happy to see it. With some I was in pool and other wearing a morning jacket and other with my brother as well that is a picture was took before you send the camera. The one with my mum was not in but I guess it also got spoiled and also the one at my working place was also not among. Honey let me know when you received this picture. And please when you are crossing the road you should be careful because I know you will go to the bank with happiness...LoL
Well I will be living and cant wait to chat with you today. Honey sorry I w
Read more