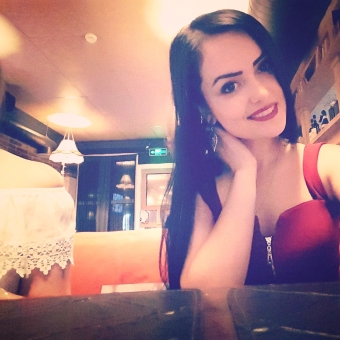 REPORT N1 (added on September, 10, 2019)
Hyong (USA)
I met a scammer named Cristina Oleg Noroc on the OKCupid dating site (OKCupid ID: krisstinat_2016). Through OKCupid chat messages, she claimed to be a single unmarried woman aged 26, with no children, no mother or living relatives, but only a father who abandoned her to her grandparents and now living in Moscow. She also claimed to be living at Valea Trandafirilor 6 in Chisinau, Moldova, but gave me a different address of Lev Tolstoi 24 in the same city a few days later. She said she studied at university for 3 years, worked in a pharmacy, was too poor to take vacations, and had never traveled abroad.
She preferred to communicate by email (cristinarusu5000@gmail.com), so closed her profile on January 26. Almost immediately she began asking for money-first to pay for English lessons ("I find a woman who can learn me English!3 days a week come to my house!one hour at day!she want 100 euro for month!its ok?), a passport with visa ("Visa and the passport cost 350-400 euros), and then to help buy her a phone. She wanted money sent by Western Union or Moneygram as she said banks in Moldova were corrupt, but I insisted on a proper bank account where her identity could be verified.
I checked all her photos when she sent them and found one photo belonging to a different woman. As the addresses she gave me differed, I did a background check on her and found almost everything she told me was a lie. She was divorced, had a child, had a living mother, was unemployed, never went to university, and had given the address of a travel agency for her legal address. She also had traveled back and forth from her country to Europe 45 times, so her story of no passport was a lie. Finally, the background check disclosed at least 35 fraud reports on her by men potentially scammed by her, so she has been running this dating scam a long while.

Romance scam letter(s) from Cristina Noroc to Hyong (USA)
I'm trying to tell my story,i hope you gone understand what i writing!
When i was child my parents divorced!i was 3 years!very little girl!my father go in Moscow and never come back!he never called!my mother died!my grandparents take care of my!now my only family is a uncle!he live in Ucraina!here I'm alone!im living in a rented apartment!
I work all day
I pay for apartment 150 euros at month
And i work for 300$ al month
Is very difficult here to live
I don't have any help from nobody
I want to find a good person here
To do a family
I want to be happy

You can do online transfer with money gram!is very easy!

I dont know what is the cod!you say is more easy whit the transfer!but is see is more dicil!if you want to help my whit western union if not what is it!here say my in the bank for do a transfer just need the account!