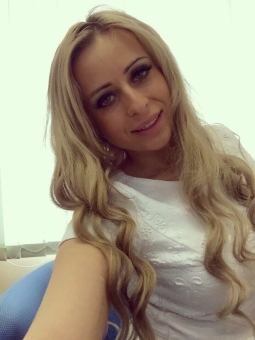 REPORT N1 (added on February, 18, 2020)
Richard (Germany)
This lady started to write to me in the beginning of january, pretending she had found my email adress in a dating agency. In the initial phase of the correspondence she answered my questions and apparently avoided standard letters. After a few letters she began to express serious feelings for me at the same time complaining about alcoholic abuse among Russian men and telling me about her violent boyfriend. Then she started talking about visiting me in my country, and told me she had contacted a travel agency. She described her travelling to Moscow for interview in Embassy, and her letters became more standard letters, the same as I have seen from other scammers talking about their efforts to obtain visa and tickets. She eventually found out that she desperately needed 500 USD, this was the only hindrance between us and our happiness.
REPORT N2 (added on April, 7, 2020)
Austin (USA)
Known scammer from Russia.

Why do you call me a scammer? What questions have I not answered you?
Repeat your questions to me? I wrote you a letter and you didn’t answer anything about him ... Why are you so angry that I did bad to you.

Well, I want to tell you about my hobbies. I like listening to different music. It depends on my mood and feelings. I like Eminem as well. I suppose he is a magnificent rap artist. I hope you agree with me. I like the group “Modern Talking” very much. I like “Pink Floyd”.
They are not similar to any others. There are a great number of popular musicians abroad. But I remember Russians as well. May be you heard about the Russian group "Spleen" or "Chaif." But I think the most famous Russian group abroad is “Gorky Park”. Probably you've heard about it. They had a great success at the beginning of 90s. I like going to the cinema very much. Now days a lot of foreign films are on the screen in Russia. Foreign cinema is widely spread in Russia. I like such old American films as Gladiator, Brave Heart. Mel Gibson is a good actor.

My health is the most important thing for me. I do not boast. My health is really good, and I always try to be in a good form. I every morning, try to spend as much times as possible in the open air. I don’t have a car, but I go to work by bus, and the rest of the time I ride a bicycle. I have been living in the conditions of rather cold winters and damp autumn since my childhood. Such of clim
Read more

Emails from Guzel Zainutdinova to Austin (USA)
Salute;)
For you will be unexpectedness You are obviously surprised, that have received from me the letter. We had no representation about each other with you to todayEarlier we did not know each other. And today that hour which, most likely, will change our lives. Yes, probably, it is loudly told, but I always I am accustomed to think with optimism. I hope, that you present the man and all life you expected my letter;) Because I sincere the girl and at me kind and serious intentions.
What country are you from?
I I will write you about myself pair of words. My name is Guzel. Me 31 year. I was born and live in RU in the city of Saratov. I do not smoke or drink alcohol, in my free time I study fitness, read literature, listen to music.
My girlfriend met a man through dating agency. She left contacts and she provided your contact to me. If you want to get to know me, just answer me. Perhaps, you will not bored chat with me and we will find common interests.
I will wait for an answer.
I am waiting for a letter to this email address lily3252020@yandex.com
Good luck, new girlfriend Guzel!

Hi hi hi man, I have not heard news from you for a long time. Why are you wetting? Why? You did not like my photo? Have you received my letter? .
You do not have time for me?
Dear, please answer me, write me at least something. Hope to hear from you soon.
Hope to hear from you very soon, Guzel.