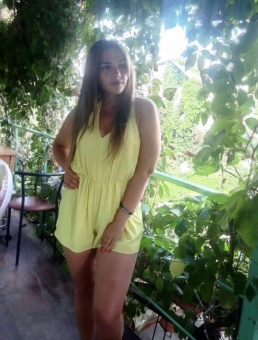 REPORT N1 (added on May, 5, 2020)
Jeff (Netherlands)
I met a woman named Cindy online through the OKCupid dating site, and communicated with her for about 1 month. On the site, she claimed to be living in Amsterdam, NL, but actually was a Ukraine woman who moved to Florida 3 years ago; her stated age was 32.Very quickly, she asked to communicate only through WhatsApp (+1-386-320-3894) and then closed her account the same day.
In her letters, she professed to have studied acting and was a model in her 20s, but now bought and sold female clothing and jewelry. She said her father was Ukrainian but her mother was living in Kentucky. By her third letter, she was hinting at financial help, as her business was not doing well and she claimed she had been evicted from her shop space. When that story did not elicit any offers to send money, her next letter claimed her mother was in very critical condition in Kentucky and that she would be going there the next day to care for her. Two letters later, in case I did not make the connection, she repeated the critical nature of her mother's health, said she really needed financial help, and made a vague promise to repay it once her "debtor" paid money owed to her. I asked where her mother was hospitalized and she declared "Medical Center at Bowling Green" and gave the doctor's name as Dr. K.G. Sahetya. While the medical center exists, I could find no such doctor on the hospital records; the only similarly-named doctor online was a 70-year-old cardiologist with his own practice, who would be unlikely to treat a critically ill heart patient from Ukraine.
She sent four photos and claimed not to be able to send more as her phone was acting up. In her last letter, she declared she would be leaving the US to go back to Ukraine and asked me to meet her there, without giving me a street address, and repeating once more her hope that I would help her with some money. I did not believe any of her stories, or why she would leave a critically ill mother to travel to Ukraine, and broke off contact accordingly.

Emails from Cindy to Jeff (Netherlands)
Hello Handsome
How are you doing ?
Ok dear. I am good
What are you doing now ?
I am watching a movie and talking to you
I am watching a movie titled Quantico
I buy and sell female clothing and jewelries and also hoping to become a movie star
I studied a little acting
I did some modeling when I was in my 20s
Yes I hoping for [film auditions] someday
I have never visited NY but I would love to be there soon
I don’t know about any firm work in Amsterdam but I would ask before leaving to USA
I don’t have family here I am only here [Netherlands] on vacation and also to get some new stock
I actually lives in Port St Lucie Florida
I am an Ukrainian-American born and bred in Ukraine but I have moved to USA 3years ago. I have been here for the new year and also on a business trip
Send me your number so we can keep in touch on whatsApp
+13863203894
Yes I do miss Ukraine
Yes I had boyfriend back home but not anymore
He was abusive and a cheat
Yes he [hit me]
Nope he lives in Ukraine
Nope the relationship ended before i leave for USA

My mom lives in Kentucky USA. She's an American but my dad was an Ukrainian.

Business is not doing too good now.
I couldn't pay for my shop space and I was evicted by the owner.
I have exceeded the grace period that's why I was evicted.
I'm now hoping to start an online trade.
Yes I wish im closer to massage your body and make you feel bett
Read more