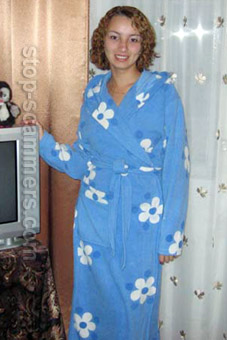 REPORT N1 (added on October, 25, 2005)
Ward (USA)
I was contacted by Olga via the cupidbay site. We exchanged a few emails and then she got "ill" and needed $80 to pay for internet service or drugs for the illness.
REPORT N2 (added on February, 13, 2006)
Herb (Canada)
Scam for air fair, passport and visa.
REPORT N3 (added on May, 23, 2007)
Doug (USA)
I was just sent an enquiry on singlesnet from "misskiss1", of Fairview Heights IL, and I recognised 'Olga Maltseva' from one of the two photos - I hadn't seen the second photo before.

Emails from Olga Maltseva to Ward (USA)
Hi my lovely Ward.
Today Thursday. To me I was very sad also has decided to come here, with the request.
Whether I do not know you will understand me whether or not, simply me the feeling of a cold forces to go here and Fear. When I am in an Internet of cafe I feel what that Heat which proceeds from you. It becomes good me on soul from letters and from ideas about That you become closer and there is a thin contact which connects us love.
But I sometimes feel fear. Fear to remain one in this world under The name "Russia" one.... without you.
There's nothing to be done with it, my female essence is those. Me frequently betraid and Deceived, it were people with masks of very true friends. I want that you have told to me that You will not throw me and you will not cease to write the letter. Only it. But it is enough about it.

Yesterday the first snow was, it began so suddenly, that many peoples were not ready to this and those who was In the street in clothes for autumn have very much frozen, including me. And today with morning of a pool have been covered Ice. A frost and the sun - wonderful day. People have dressed warm things. Cats and dogs have hidden in houses Or in cellars. Animals feel changes in weather better than people and they had time to find To themselves warm places to not freeze. And people had not time. Many people were ill a flu.
I Was ill too. My mum lays in bed with high temperature. I look after her.
She sends the regards to yo
Read more