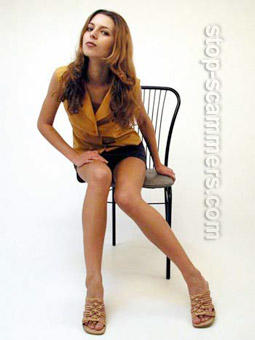 REPORT N1 (added on October, 28, 2005)
Charles (UK)
Elena seems to be one of a new bread of scammer that think the best way into my wallet is to offer themselves up as a lover. I have to admit, it makes for very interesting correspondence. I also admit to encouraging their fantasies! but the end result is the same - they want visas and tickets and all you have to do is send - in this case - $951.
Then in two weeks your lover will be by your side! Honest *****!
If you write to her - Remember, At least keep your wallet in your pocket.
The photos are not her - so probably she is a he! Now that is gross!
Cheers,
REPORT N2 (added on December, 7, 2005)
Pierre (Malta)
She contacted me.
After just two letters she said she fell madly in love with me and was saying she wanted to be my lover!! And sent me a photo saying that her body was Mine!!
Oh and sent me details of how to transfer her money for her coming to me.
Not having time to loose I stopped correspondence.
REPORT N3 (added on March, 7, 2006)
Bernd (Germany)
This girl is very clever!
Asking for 170 $ after 9 mails to pay her internet bills, WOW!
AS USUAL I NEVER PAY MONEY TO ANY GIRL no matter what they offer!
Letters and pics to follow on request...

Emails from Elena Sherstneva to Bernd (Germany)
Hello Bernd. I is much pleased so soon get the letter from you. I much like your profile, but I should like to get the photographies from you. I live in city Yoshkar-Ola . it inhere approximately in 700 kilometers from city Moscow. I want to speak you that I much like the children. I never married and I have no children. I had the experience of contact beside itself in Russia with mans, but they not there were are adjusted seriously and we happen to part, and they much often drink the alcohol and in good supply, but me this not much likes. I think that you has no such habit. I want to say that I no smoking and Very seldom to use alcohol. but sometimes I like to drink in good company not much vine though this can be much seldom. I want to speak that I wit well to play the piano, I has finished the music school, in which I learned 6 years. I want to say that I live with my mother. I have the grandmother, grandparent regrettably was died, 2 years ago. I want you to speak that I like the varied music, but basically classical. I want to have the serious relations with you, find with you its love and create lucky family. I shall pleased if you this will in the same way want. I want to speak that I write you from computer company and sometimes from my good sign woman. beside me regrettably no computer and telephone at home. I think that this will not be problem for us? I want more to learn of you, about your family. I think that you are able me soon to answer, sh
Read more