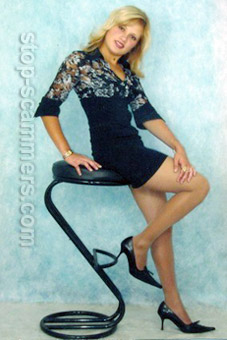 REPORT N1 (added on November, 1, 2005)
Raymond (Canada)
I had my profile on shotby cupid for some time. It is no longer there as I am quite disgusted with the attempt to scam me. I received a message to contact Olga (but called herself Olya) to contact her as she liked my profile. I responded and we corresponded and she talked about
Russian men are not nice in a relationship. She left her boyfriend one year ago, lives with her parents in a small apartment. No problem with travel as she has been outside Russian before. S|he told me that she has
told her parents about me and they were very happy for her and looked forward to meeting.
She was very patient ending her letters with kisses then hugs and kisses, your Olya. Then she was convinced that we were for each other and she suggested that we meer next month. I wrote back to her and I asked her if she was absolutely sure that she wanted to meet an older man and that the earliest we could meet would be in March or April 2006, unless she wanted to travel to Canada where I live. My last response to her was not answered right away. When I did receive an e mail from her, she recycled an old -email with a picture attached to it.
I waited for a few days and then I sent another e-mail and I asked her is she was a real girl or a scammer.. I received no response. I have a series of pictures of her. She never did get around to asking me for money. Unfortunately her letters have been deleted. I am guessing that she uses Cammoile as a last name.