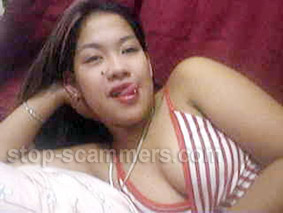 REPORT N1 (added on November, 1, 2005)
David (Australia)
This was a real ********* scammer. She approached me on Hipals and then switched straight to Yahoo Messenger. She has a portfolio of phots on Yahoo and will give access if you persist in asking. Portfolios include photos of her sister Preeti (name also used by Deola Kayafat) and her boy cousin.
After two conversations she tells me she has to move out of where she is living with a friend and won't be able to afford to connect the computer so will be offline for seveal months. Shortly after i get an email explaining how even after a bank loan of 10000 pounds (to an umenployed
person no less) and another froma friend of 5000 pounds she is still 2000 pounds short. Life sux ha. Also for someone who wasn't going to be online she was online virtually everyday for several hours at a time.
When I asked how I could help I get an email telling me she needs 600 pounds with a phone number for the agent but no address or phone number for her.
Also she tells me I don't need all the ID **** just send it Western Union with a control question and let her know. hmm .. maybe she has done this before you think.
Maybe Deola or a friend .. but definitely a scammer.

how are you doing?hope fine.Well i just thought i should mail you,since you said,you were going to mail and didnt,i was suppose to be leaving this evening,but i had called my banks manager and they were going to loan me with 10,000pounds and i would be needing,17,000 instead,because i contacted an agent,who wanted to give out an apartment,and i contacted with a friend and she was going to help me with 5,000pounds,im just so confused and dont know how to raise the money to pay for the apartment,but i was hoping i will stay at grannys house for the time being till i could raise the money.You could mail me,i will check it tonight before i leave.Till then,bye for now

Thanks for the mail,and i love chatting with you too,i dont got much to say,i wont be leaving till morning but before i go,i might try and mail again,and just to remind you,i thought you said,you was going to help out,well i could understand,if you dont want to....,just asking.i have to drop my pen here.till then,bye for now.much love

Thanks for your kind and urgent response.Its ok,its not your fault that you havent written to me,i wasnt online either,but right now,im at the internet library,thought i should check my mail,and see if there was any from you,not before i saw this.So sorry you are sick,and i hope you get better so so soon,and im really begining to worry about you,i miss you so much
Read more