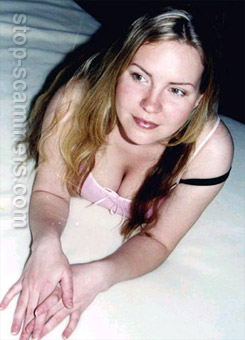 REPORT N1 (added on November, 11, 2005)
David (Australia)
This is a new scam for me and as it hasn't been put up here I thought I would send it for the information of members. This scam involves a supposed invitation to a conference on Youth Suicide. A google search turned up a reference on another scam site that if you respond you are
expected to pay in advance for accomodation at some town in Africa. It varies from invitation to invitation. The photo is taken from aprettywoman a Russian dating service, you can check the link to the imbedded photo. This person also hangs out around penpal sites and claims
to be a Nigerian looking for a husband but this is the response you get sent.

Romance scam letter(s) from Felicia Tony to David (Australia)
INVITATION TO THE "YSAPS AND ICOCL CONFERENCES 2005."

It is my pleasure to convey to you on behalf of YSAPS general secretariat members, my warmest greetings and compliments. In accordance with the humanitarian principles which we believe, especially with what the United Nations and the International Summit on child held in New York on september 1990.

Please contact the secretary to the organisers through this address: Madan juliet jackso registry_in_ysapscl2005@yahoo.com for further informations regarding the conference and do tell her that i recommended your organisation as this conference was not advertised .

ANOTHEER OF MY BE ATTACH TO YOU AGAIN