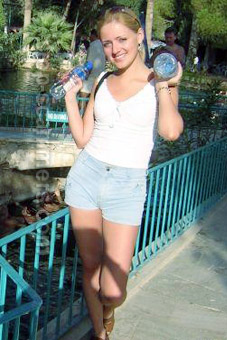 REPORT N1 (added on November, 29, 2005)
Charles (UK)
Olya may be the most intellectually challenged scammer in the history of the Internet - Or she may be exceedingly clever!
She first wrote to me from LoveCompass, but her profile was removed soon after (hmm). She told me that she is a neurosurgeon, who couldn't get any work so she became a homicide detective instead - immediately, without any training in regular police work. (I am not making this up).
A lot of our correspondence has been about this and whether or not she can prove that either of these things is true. It became quite pointed when I found she had a profile on Lucky Lovers, in which she describes herself as
a 'seller of food'! In the end we reached a stalemate. She wouldn't send me a copy of her medical qualifications, because they weren't interesting! She wouldn't send me a copy of her detective ID because in Russia detectives don't have IDs - although she did say in one letter she had
'papers' that she shows to suspects. She described herself as a 'food seller' so as not to put people off. (I really am not making this up). Apparently guys prefer food sellers to neurosurgeons or detectives.
In the end, I said I believed she was a scammer and that I would never send her any money. We agreed to meet in Moscow - she changed her mind. She asked me to come to Kazan - I decided against it. There has been a lot of 'surreal' correspondence in which Olya declares her undying love for me (regardless of anything I may have written in a previous letter. In between, she sends me letters obviously meant for someone else - fist letters, letters asking about my children and my studies - I don't have children, I don't study.
Anyway, I've called it a day and told her I'm outing her on Stop Scammers. Someone else can find out if she robs you in Kazan. Or maybe she'll ask you for money if you don't mention the 'S' word. Maybe one of you will
marry her and all your children will grow up to be surgeons or detectives.
Cheers,

Emails from Olga to Charles (UK)
Hello my new friend!!! I am very glad, that you have written to me. To tell the truth, I did not expect, that you will answer me. I think, that and that to you all this simply has already bothered such person as you each day write letters very many girls. Know, I have strange hobby for the girl: I very much like to look sports. I on it have not enough time, but I like, when someone competes. Whether if you ask I I know some sportsmen in these or those sports I likely shall not recollect any, though from Russian sportsmen, I know almost all. I like to read books and to look films. It distracts from daily has put, which sooner or later begin to bother, tire, but in due course to them simply get used and already them do not notice. You begin to live these daily affairs and when they are not present, at all do not know than to engage. Here is how time in such time I watch TV or I read books. Other interests at me are not present. I love animals, a nature and mum. She for me the closest person for whom I am ready on all. I never nothing shall make without the consent of my mum. I think to me it is necessary to tell to you about the work. I work in Law enforcement bodies of the Russian Federation. Easier speaking, I work in militia. I protect calmness of citizens of our country and the law for me above all. I have finished Medical University in the native city of Kazan in which I live now with mum. We live with mum in an one-room apartment. As they say at us in
Read more