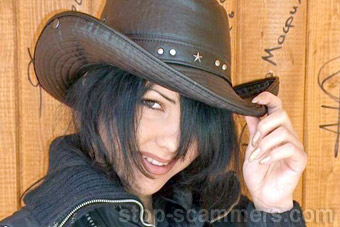 Romance scam letter(s) from Irina Shalagina to Juhani (Finland)
Hello Mikko.
I am very glad, that you have written to me. To tell the truth I at all did not trust that you will write to me because I the first time get acquainted with the person from other country on the Internet.
Now I would like to tell about myself a little. Probably you so looked mine profile on a site, but I all the same shall tell about myself. My name Irina, and my surname Shalagina. To me of 23 years. My girlfriends and familiar speak, that I look more youngly the years. With this letter I send you my photo. I very much would like to see more than your photos.
You can send them in the near future? I was born and I live in beautiful and pure city Cheboksary which to be in 800 kilometers from Moscow. In 150 kilometers on a southeast the large city of Kazan so it will be easy for you to find my city on a map is located.
Till 17 years I studied in an average comprehensive school after that has acted In Cheboksary State Technical university on a speciality the Economist. Having studied there 5 years I have finished this university with distinction. You of that to me would know it costed.:-) Within 2 years could not find to itself work as all places on my speciality have been borrowed and unclaimed, but I all the same have found her and since then I work as the bookkeeper in passport and visa service of city Cheboksary.
Very much I like to travel, but this very expensive pleasure. I was possible manage only America, and that on work. I went in
Read more

Romance scam letter(s) from Irina Shalagina to Vincent (France)
Hi mine Vincent!
Is happy to see your letter.
For a today already second time I come into the Internet of cafe.
For the first time your letter was not also I left therefrom, has thought, that you will write hardly later and were right.
Vincent, write to me more often, well?
Tell please as you carried out the last days off. Further she runs into the Caspian sea!
What reservoirs are at you? Whether it is a lot of at you reserves?
If is tell please about them.
I very much love animals. When I go to collect mushrooms in reserve sometimes I see that the rabbit a raccoon, it happens saw to fiber. But I very much like mushrooms. They at you are or only in shops?
Also very much I like to prepare. My favourite dishes: a meat borshch, soup, a mashed potatoes with cookies, pel'menis from the hen, salads, pies and pies which while turn out not so well!;-)
Yes, slightly has not overlooked, I wanted to tell even about my travel. 3 days prior to departure home has visited New York. SUPER!!!
Has visited on a statue of freedom (the ferry 10 $).
Have reached up to ground zero (there where twins stood): a hole fenced with an iron fencing, and a number people selling photos at the moment of falling of towers; Empire State Building - the highest building in New York: beauty, below all such tiny; Brighton scourge - many drunk Russian, living a side - «-áîê with people in poor houses, circle Russian food (even the granny sells pies in the street, +
Read more