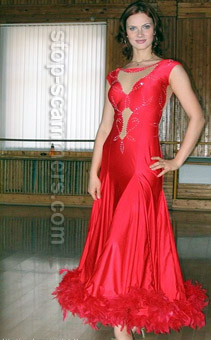 REPORT N1 (added on February, 16, 2006)
Ed (USA)
We e-mailed daily for about 3 months. We talked about taking this to the next level. We both decided that we should met. I wanted to meet in London she wanted to come here and spend a month. She said that she would have no problem in getting visa.
So I told here to go for it. Well after about 2 weeks of here getting everything here ticket, visa and so on. She told me that she would be at airport on Feb. 9th. About a week before she was to leave she told me that she was told that she needed at least $700 dollars spending money to prove to customs that she could support hereself. She told me that she only had $ 200 and asked me to send her the rest. I did. So I went to met here at airport she did not show up. She called my home and talked to my mom she said that she had troubles in Moscow. That was the last I heard from here. The number she called from is 908-725-3835.

Emails from Olesya Valieva to Ed (USA)
My dear Ed!!!!!!!!!
I so glad to receive your mail, which I just have red. Your letters always bought up my mood, its very great, that loving each other people can show their feelings through e-mails, we can understand each other and becoming closer, knowing each other better, but its not as great as personal meeting!
My love, I just come here from agency. I paid for return ticket,
ticket to you and visa. If you wish, we can change a date of return ticket when we shall be together, I asked about it. I filled today questionnaire for people leaving to USA, and red all information and things and documents that is necessary for anybody going to America from Russia. I showed there my place for living here, there, my work,
social status and a lots of others. At the end of this blank was question about pocket money, and there was showed that at least I have to take with me at least 700 dollars. igot only 120 from my dad, I was very surprised about it and I asked manager what does it mean!? He answered that this money called "Pocket money" and everybody who leaving Russia knows it! I asked why I have to get such sum with me.
He answered, that its not rules of Russia, its rules from USA, and this sum is necessary to they be sure that visitor can afford living at USA with any situation and was on the *****. There is such sum in any country to enter but in every country its different. I asked what I have to do if I don't have such money? Its seems I can be detai
Read more