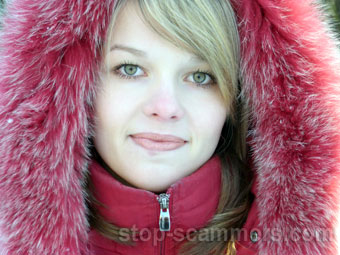 REPORT N1 (added on February, 21, 2006)
Hamid (USA)
I've been corresponding with this woman since December of 2005. Soon after our initial acquaintance, we started to write passionate letters together, and she sent me a picture almost with every letter. That went to the point that I asked her if she would spend the rest of her life with me and she said, "YES". Then in three instances she asked me for money. First I told her that I would like to meet her in Russia and I need an invitation letter from her. While I could get this invitation for $30.00 in the United States, she asked me for $150.00 to arrange the paperwork!!!! Then I asked her if she can get visa and come to the US, and she asked me for 1100 and some cents to get her visa and complete her paperwork. I decided to go to Russia to meet her. She agreed. In the third instance she asked me for money because she didn't have enough money to take a trip to St. Petersburg, where we were supposed to meet. I even bought a package to go there, and I agreed to send her money just for her round trip to St. Petersburg. Throughout our communication, I asked her three things that she ignored and I started to suspect that she is a potential scammer. First I asked her to talk on the phone and even offer her that I would call her. She told me that she didn't have phone and agreed to call me, so I sent her my numbers. After that she completely ignored that, despite my insistence. Then I noticed that all her pictures are with pants. I asked her to send me a picture with a skirt. She claimed that she did not have a camera. Then I created a fake e-mail address in hotmail and send her an e-mail with a different name, telling her that I am in search of my love and I was willing to know her better. I thought that if she was as honest, in love, and passionate as she claimed, she wouldn't have answered the letter or she would have said that she was not interested. However, as I expected, she sent a letter to that e-mail that was a copy of the very first letter that she sent to me. This is why I am claiming her as a very strong potential scammer. I never sent her the money but now I am loosing over $1200.00 to cancel the package that I bought to go to St. Petersburg.

Romance scam letter(s) from Olga to Hamid (USA)
Hi my new friend Hamid !!!
I was so pleased, that you have answered my letter. I liked your structure.
And it - reason, why I have written to you the letter.
I really want to know more concerning you. I would like to know a way, with which you live,
I really have interested in things, which you like.
I want to inform you something concerning me directly in this letter.
My name - Olga. I live in Russia. In small city, the settlement of a urban type -Yaransk is exacter.
It - approximately 1200 kms from Moscow. Billy My height - 167cm and me, weight - 52 kg. My eyes green. My hair, almost white.
I was never married, and I have no any children.
I - woman and sensitive internal part of my heart. I like home comfort, high temperature and silent concerning family.
I was born on January 19 in 1982. In 1999 I was finished School and entered into economic ability.
At study 5 I years has finished university. My speciality - economist.
I have studied English language at university. Now I work the economist at a dairy factory.
I live with my parents. I have younger brother. To him 8 years. Call it Dima.
I write from int. Cafe, as we have no the computer of a house.
Write to me as can, I expect your letter and I shall be very glad.
Olga

Hi mine lovely Hamid!!!
Once again I want to congratulate you on the come 2006.
Large to you thanks for the letter and for congratulations.
Excuse that has not written earlier to you, 1 and
Read more