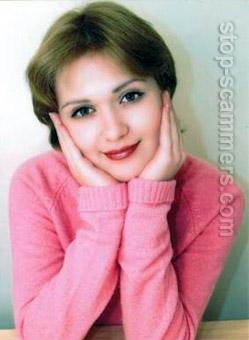 REPORT N1 (added on February, 24, 2006)
Shane (UK)
Typical nigerian scammer.
Please find attached photograph of scammer, and email which she sent trying to get me to forward money. I played her along for a while using instant chat on yahoo messenger, but when she realised I wasn't going to fall for her scam, she became abusive, then moved on to some other target.
Take Care Guys!!

Emails from Kimberly Williams to Shane (UK)
Hello,
My names is Kimberly G. Williams, i am 26 year old lady ,i work as fashion designer..........My hobbies i like swimming ,dancing, reading novels, magazines,going to beach and occassions,going to shoppings,and having a nice time with the man i love.........My Father was a successfull business man in UK ,my Father went to Spain on business in SPAIN where he met my Mother and .......before his assignment was due he impregnated my Mother and he left back to report to his company. Later came back to SPAIN to pick my Mother and both of them travel down to MANCHESTER, England, in United kingdom where my Mother gave birth to me. Getting to 2 months after I was born, Bad things which my parent didn't planed happened when my Father died it was a hard time for my Mother of 15 years old baby who is not a British citizen and also an Orphan. Struggling here and there to feed and train me..well my mother really surffer for me alot i can't lie she really try her possible best to just make sure i become something in life...after i graduated i won a scollarship to fashion in AUSTRALIA..and well the agency i fashion for there they do not pay me well at all..after that i went to fashion designer in southafrica and later come back to united kingdom...well all the money i make from my fashion i use it to take care of tax and other expensis and other for accomodation..well now i don't even like the fashion job again..coz they do not pay me well ,,since then i have been l
Read more