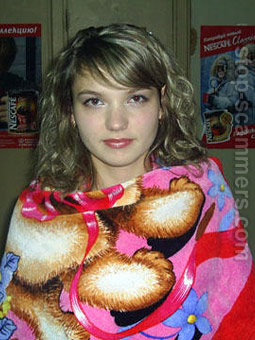 WE WROTE FOR ABOUT 3 MONTHS THEN SHE WANTED TO COME OVER BUT SHE HAD NO MONEY SO I WESTERN UNION ED HER $1653.00 FOR TICKETS AND VISA. THE NIGHT BEFORE SHE WAS SUPPOSED ARRIVE SHE E MAILED AND SAID THEY WOULD NOT LET HER LEAVE RUSSIA WITHOUT SPENDING MONEY SO I SENT HER ANOTHER $543.00. i DID NOT HEAR FROM HER THE DAY SHE WAS SUPPOSED TO LEAVE I HAD A BAD FEELING SO I CONTACTED THE AIRLINES SHE HAD BOUGHT THE TICKET AND CASHED IT IN .AND THAT WAS IN A DIFFERENT NAME THAT WAS YULIYA SAVENKOVA
SHE CLAIMS HER NAME WAS YULIYA SOUNGUROVA THEN SHE SAID HER PARENTS NAMES ARE:

NINA IVANOVNA (MOM)
I SENT HER A BIRTHDAY GIFT AND THAT WAS SENT TO:
SUNGUROV VLADIMIR
P.O. BOX 30' I'
RUSSIA 424019
I HAVE ABOUT 20 LETTERS I COULD FORWARD.
COULD YOU TELL ME IF THESE WOMEN EVER GET CAUGHT AND WHAT WILL HAPPEN TO THEM? I THINK THEY ARE A DISGRACE TO RUSSIA
REPORT N2 (added on April, 7, 2006)
William (USA)
Wedding-Coach
REPORT N3 (added on October, 13, 2006)
Fernando (Mexico)
Well as i guess she did to many others she wrote me because i have a profile in a dating site, we have being e-mailing and as to many other she tells me that she loves me and that she wants to come here to meet me but that she needs mones to make the trip, she also has sent me a picture of her passport btu i haven¦t sent her any money, i have loads of letters from her, a lot of pictures too, she asked for my phone number but she has never called.Is there a way to proceed legaly against these kind of frauders?? By the way, thanks to that site i have a lot of letter from other like her, i've found some of the already listed in the site.

Emails from Julia Soungurova to John (USA)
Hello my dear John!
I am glad to write again to you the answer to your letter. It is very pleasant for me, that so quickly you answer on my letters.
Unfortunately, I cannot as quickly to answer you because you know,
that I have no own computer. But now it is not important for me. The main thing for me now, that I have found you, that refers to "knocked up to heavens".
Earlier I also could not think, that two strangers can completely communicate in different doomsday, on distance of many miles where them the seas and divide oceans and kilometers of a land.
I should tell to you that when I want to have relations with other person, I give all attention only for him. It means that there are no other men in my life. I want to try to construct relations with you and I do not want to profane it change with another the man. I not such woman to begin relations with a deceit. I hope that you will understand that I have the same requirements and for my partner too? I do not like changes and treachery. I had too much treachery in my life. I do not want to repeat the last mistakes, excuse me if my requirements too rigid. But I hope that I and you more never in the life will meet treachery.
My small town Chistopol has got lost somewhere away in the Russian remote places and it not so simply to find on a map. It is located in 144 kilometers to a southeast from city of Kazan on the left coast of the river of Kama. If it is interesting to you, I can tell a little abo
Read more

Emails from Julia Soungurova to Fernando (Mexico)
She silently sat at the desk … there Was a night … anything in this world more did not disturb her, nothing has stirred in this dark as sub consciousness, the universe …
Time has stiffened, has stood and it is not courageous to disturb her… She sat and thought of him. Waited for him...

These words it is possible to begin my letter. Today I want to ask you some questions. This question for me very important!!! How you treat to me? What in me is bad? You want with me there will be or it simply games? Excuse for my sharpness. I already for a long time know you and from your party was not present what steps to our meeting. To me it is insulting for it. I dreamed about the friend that I to find the prince which will be ready for the sake of me on all!!!! Which will love me!!!
Time flies also I does not know what to do. My parents have begun to speak that you play with me because at you many free time. Speak that to me for a long time to find to itself the husband and to leave for the first comer. To me of it to think even it is disgusting. Parents recently have invited the guy to acquaint with me. Will imagine they have decided to find the husband for me. Well I have got acquainted with this guy. He appeared the son of one businessman. The guy is not **** certainly but on many a parameter to me has not approached. He very haughty, impudent, avaricious. Besides on ours of appointments he did not miss any skirt. I have quarreled with my parents from for th
Read more