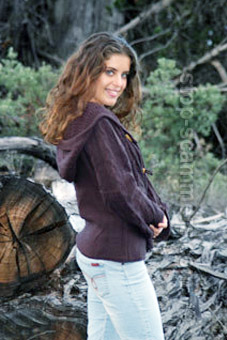 REPORT N1 (added on March, 7, 2006)
Jared (USA)
She met me through a *** site adultfriendfinder, She had posted her email address in a chat room saying she wanted to chat. In her profile she has down that she wants to have ****** chat or email. I hit her up just to see what she really wanted. Within 15 minutes of just chatting she asked me for money. She wanted $650 dollars to update a plane ticket to come see me. She claimed she was a model and was in school in Lagos, Nigeria and originally from Venice, Italy. She was almost out school and needed a place to go. I asked her if she had any family back in Italy that she cared about. Then she threw a fit and said not to bring up her past. Then she went on, IN CAPITAL LETTERS, saying that her parents died in a car wreck and that she was an only child. Where are her grandparents, uncles, aunts? I continued to ask myself, what was she going to do after she graduated. She said she needed money to be able to go some where. She needed money to update a plane ticket and that she needed the money soon since school was almost out. I was chatting with her on a saturday and she said she had to go to class. I asked her if they had class on the weekend. And of course she said yes. She said yes to everything I asked. Whatever I wanted to hear she said. She told me she wanted to start a family and be in a serious relationship with me. I contiued to ask her why she wanted to be with someone she didn't know. She would regularly get mad if I started asking questions that would begin to uncover her scam. Other things she did: Wanted money through MONEY GRAMM, Wanted me to send money to her Model AGENT, Changed her story saying she needed money for school and not a ticket. She said she wouldn't be able to get her masters degree if she couldn't pay for school. How could she be in school without paying for it first? They don't let you do that, especially in a ****** country like NIGERIA. I have noticed on adultfriendfinder.com that if their profile isn't filled out much that they aren't real. She just had the minimum info. The pictures she had up there were to good to be true. Of course they were of a model posing and she was way hot. In her profile she said she was middle eastern. I know what a middle eastern person looks like and she was far from it. In the back of my mind I kept thinking I saw those pictures before but couldn't and still can't put my thumb on it. I know I have seen them. Points to look after: She's a MODEL, wants MONEY to come see YOU, wants money sent by MONEY GRAMM and sent to an AGENT, says her PARENTS ARE DEAD, she HAS NO MONEY, found her on a *** / DATING SITE, has NO WEB CAM.
Created: 2006-03-07    Last updated: 2006-06-15    Views: 1321