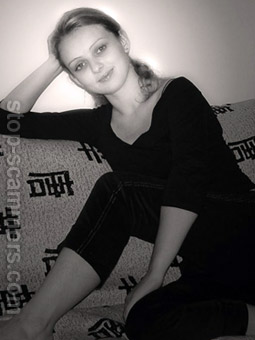 REPORT N1 (added on March, 10, 2006)
Charles (USA)
I was contacted via yahoo.com personals by Lyudmila, her profile stated she was from Wrentham, Maryland USA.
I responded only to find out she was actually in Irkutsk Russia. Her letters seemed real enough, she answered most of my questions but vaguely. Then on valentines day she sent me a poem she claimed she had written. A Google search revealed it was a published work by a fellow from Australia. I never brought up the plagerism. Then she wrote she needed help to raise $400 for a visa to visit. I wrote back that I could not send it at this time but might be able to later. Her letters continued each day until she sent a song that she claimed o have penned the night before as she thought of me. A google search on the 1st three lines turned up the Letter(s) from Natalia Kapustina to Robert Wolfe (USA) on your site.

Emails from Ludmila Bogatyreva to Charles (USA)
Hello my new friend, Charles!!!
My name is Lyudmila, friends call me Lyuda or Mila. I am very happy that you could to answer me my letter to you. I did not expect, that you to me to write, but in depth oppress I trusted that you will write to me. I with huge pleasure now to write to you. I have decided to write to you this letter because I to want to find my only thing the man with whom I could create loving family. Probably you ask, why I have written to you. I to answer this question. I Learned that there is such site of acquaintances www.yahoopersonals.com on which I to find Your profile. I to see your photo and you very much to like me. I am attentive to read it and have decided to write only to you. To me very much Your structure has liked.
I thought, if you will not answer me that I never I shall be To get acquainted in such a way through the Internet.
Only you the man to whom I to write Such letter. I to not want to get acquainted with several guys, because it not correctly. If I to want to find my only man that I should write only to one man. You agree with me? I so would like to tell about myself much, that I to not know with That to begin. As you already to know, I to live in Russia. It is the remarkable country with the Culture and the sights. I live in city called Irkutsk. It is city is in Siberia. You should not think that Siberia it always snow and it is always cold. It at all so. In the summer here it is rather warm also sunny. It is re
Read more