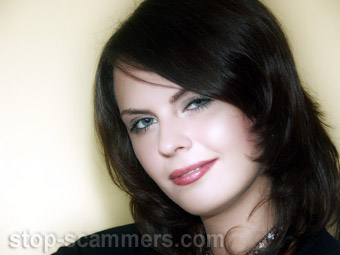 REPORT N1 (added on March, 14, 2006)
Arnold (USA)
She drags you on for a few weeks sends dozens of pictures even personalizes them for you, then asks for money for visa's and airline tickets. 970 dollars.
REPORT N2 (added on September, 7, 2006)
B?rje (Sweden)
This beautiful girl is a typical scammer; she sent me some nice studio photos, long standard letters without answering my questions and then suddenly she needen more than $ 300.00 for the operation of her sick mother.
REPORT N3 (added on December, 8, 2006)
Jack (England)
Operates as Irina Irina Fominykh. Later she/he wants the money to be sent to Timur Mirzayanov because her passort is not available to pick up the money.
Their address is given as: Kirpichnaya street 49, apt 14
REPORT N4 (added on December, 29, 2007)
Alan (Scotland)
Well everything seemed fine for over 2 weeks and to be honest its hard for me to do this but I have to because otherwise someone else could get caught out ... although I didn't.
I received letters regularly - most days actually - from Elena. In fact everything was completely normal up until about a week ago.
We had talked about being together and Elena had even agreed that I would visit St.Petersburg in either January or February next year.
However, I obviously had to book flights and so I was trying to get a date confirmed.
Suddenly I get a letter which I still have which says that her rented apartment has been plundered that that by Monday could I send 300$ or more if possible to pay for her rent as her money has been stolen.
I was to do so via Western Union and the name to send it to name Irina Maltseva.
Elena had also said that she would not be offended if because she had had to ask me because there was no one else she could - that I would not write to her again.
In an earlier letter she had said that she wanted to visit me here and that she would ask her parents for some money. Alarm bells rangs.
Last of all and to make the letter sound authentic, Elena said that she once again wanted to apologize for her tactlessness.
I rest my case.
REPORT N5 (added on June, 6, 2008)
Alan (United Kingdom)
Wrote to a girl I saw on the internet for a good few months. She seemed honest enough, never ever mentioned money or anything. Then one day months later, out of the blue she needed money. Now she could've been honest and not a scammer, these things happen to even the best of us but why would she want the money sent to a different name? So I wrote back as usual but never mentioned money and lo and behold, I haven''t heard from her since.

Romance scam letter(s) from Irina Fominykh to Arnold (USA)
Hello again. Thank for the letter. I never corresponded with the person from for borders. Now I have such opportunity. I hoped, that you will answer my letter when I have written to you on site. Probably you looked my structure, but there is poorly written about me. I shall try to tell about myself more. I think, that it will be interesting to you to find out about me. Excuse, that my English not so good. But I try to learn him as it is possible better. Sometimes to me to hav
Read more

I am very glad, that you have become interested in me. And I shall try, that you were not disappointed with me and have learned as much as possible about me. But I as would like to learn you better. I ask you write about myself more in detail. In fact “ the First Sight ” allows to see only that is obvious. And when you learn people better estimations of character traits, outlooks can vary, and it is cardinal. You to me seem very beautiful person, I hope, that y
Read more

Romance scam letter(s) from Irina Fominykh to Jack (England)
Hello my love Jack!!!
I really miss you very much. I want to see you, to kiss you, to do everything you want. I will do everything to be with you as soon as possible. I know that you will do it too. I know that my life with you will be very happy. I love you much more than you can imagine. My love for you is my life now. I live now only for you. You must feel it as I feel your love. I think that I will be able to come to you very soon. I want it right now. I will
Read more

Romance scam letter(s) from Irina Fominykh to Alan (Scotland)
Hello Alan!
It is very a shame to me before you and if you to take offence at me and to cease to write to me I shall not become angry about you.
Many troubles have gushed recently, that it is terrible to me to write to you, suddenly you to throw me for ever.
I at all do not know I that to start.
At me any strip of bad luck a black strip in my life.
Yesterday my apartment have plundered also I has remained without money to residing.
Someone knew, that I recent
Read more

Romance scam letter(s) from Irina Fominykh to Alan (United Kingdom)
Hello my new friend! Alan, I am very sorry that my reply made you to wait for it for some time.
But in any case I hope that this letter will not be without reply. It is very pleasant for that you are interested in me and in my person. And it will be very interesting for me to know what it will lead to. In general, the Internet acquaintance was advised my by one of my girlfriends who got marriage with a foreign man and she is living in the USA now and everything is
Read more