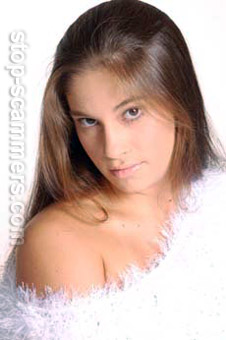 REPORT N1 (added on March, 28, 2006)
John (UK)
The web site above is 90% scammers. Nigerian, Ukrainian & Russian. This girl's photos are of a model from Hawii, stolen from focus agency hawaii. The scammer attempts usual frauds such as travel, visa, medical expenses etc.
REPORT N2 (added on April, 4, 2007)
Raf (Belgium)
She contacted me yesterday, saying she read my profile and was interested... On her profile I found that she was dutch so I gave it a go.
The first thing I noticed was that she insisted on communicating in english though she had been living in Holland for 30 years. She said she was on this dating site to find a man to marry. She left Holland two weeks ago to go on vacation in Nigeria to be with her sick grandmother. She was supposed to have taken a plane back home but missed it. On top of that she didn't have anywhere to go when she got back because the friend that she was living with was getting married and so she was looking for a place to stay... permanently...
At that point I started to feel weird. This beautiful woman wanted to come over from Nigeria and live with me forever more... some things are just too good to be true... So I started to ask a few questions about things a local Dutch girl should know the answer to. She said that she went to an english school in Holland...
REPORT N3 (added on November, 28, 2007)
Duane (USA)
Well i met this person on big and beautiful people meet!go figure that one out. She sent me the standard im interested in you flirt,and from there two lettes later after she said she was in Africa for a grandfathers ceremonies,from her home of California,USA.she was giving me letters with a phone number of a hotel she was staying at and to call her directly,well not a chance in hell of that happening,the bs these people create to try and live off a simple persons dreams!yup total scam artist here she or he or whoever they are.
REPORT N4 (added on December, 20, 2007)
Alfred (USA)
Contacted me for money for travel assistance to US.

Romance scam letter(s) from Cecilia Wilson to Duane (USA)
ok babe thanks for writting me back , rigth ow babe am out of state due to my grandfather rembrance ceremonies ever since a week and three days now here in africa. well after the ceremonies my family wanted me to stay and marry an african before going back to state as the only girl and the oldest child of the family ,which i refused and neglect there offer and what they did was to secured me tigth from the family compound and seize myreturn ticket and seized some of my clothees ,i decided to leave the compound and ran toother cioty tolodge in a motel to secure mylife so rigth now i can only give you the motel manager phone number if you are willing to talk tobme on the phone and he will give me phone to speak with you , his name is rolland a very nice and kind man , tell him you wanna speak with lizzy in room no 7,the name ofthe motelis AUSTEX IN HOTEL .
so if you want the phone number i can give you , so that immdiately you call him he will bring phone
Read more