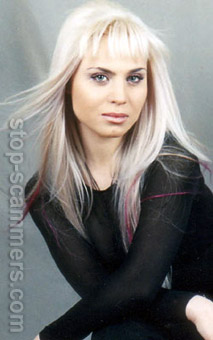 REPORT N1 (added on April, 21, 2006)
I. T. (Greece)
Be Aware .. New scammers (class 2006) from Moldova,Chicinau (!). They must be several girls who do this all together.
Valia promised to visit me here (in Greece) as she supposed to have a Romanian passport(but i didn't ask for a copy-mistake).
I sent her the tickets .. the airplane tickets were from Tarom (Romanian airlines) departure from Chicinau 14 April and return for 27 April .I sent these tickets with DHL (courier service) as i couldn't send them in normal way(wired) by Tarom from Greece to Chicinau airport...she got the tickets from DHL Chicinau on 11 April (tuesday) and didn't use them (14 April was the departure day).She probably exchange the return tickets for money (probably about 170 euros).I also sent 230 euros as it is needed for Romanian citizens - they need 15 euros per day in Greece to show in customs. I did that just one day before the departure (13 April). I didn't suspect her as she didn't ask me money for tickets but just to help her.I bought the tickets & sent...thinking that 2-3 days before the departure you can't exchange tickets for money,at least you can't get back the whole ammount.I was wrong about her intentions...i lost about 600 euros and she earned about 400 euros.
She is new, not so smart (i was ******!) and run the scamming with other girls too.
Be aware of new girls(new class of scammers) from Chicinau, Moldova generally.
They are new & seemed to be very "hungry", they are ready to spend a lot of hours with you:
writing e-mails, sms & even talking with you many hours on the phone..

Emails from Valentina Chirita to I. T. (Greece)
Hi Yannis, i am stil in Chishinau, becouse in custom stoped me here. They asc hotel reservation for all time and 25euros for evry day. They say me that this is the regol for evrybody whu go to Europe. I am very sad, and i dont know what made, they say that i can cenge the tichet for anather day. I losse telefon, or somthing take it in the airpeort, becouse i call and it is closs. I hope you will look post before to go to Soloniki, i am waiting your letter here, stikl will find somebody with telefon which to call me. I am rely sad and i just think to go to Bucharest with bus for get a playn from ther, what you think? I kiss you and waite your reaply.
Valea