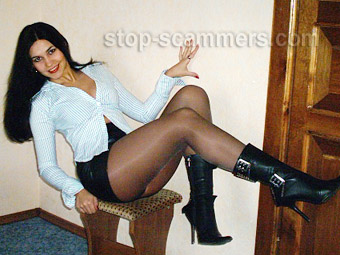 REPORT N1 (added on April, 26, 2006)
Ivan (Sweden)
This is a translation scam and they have used this girl since 2002. She is not in to many reports about scammers, I have only found 1 so far.Everything is very well done and you are never given a reason to belive that she's not for real. She never ask you for money and she's very patience adn manipulative, she really got me going and I was looking for sign's of a scam during the whole time of correspondens. I think that this girl do exist but I don't know if she's pullin the string's, is a part of the scam by her own free will or if she's forced to it. I got pictures of her with her friends taken just for me she said and also a pic of her with her sister. She dissapeared (got ill) when I mentioned that I would like to come and see her before taking this any further. She is really giving a great effort to write those letters but by an accident I found a report with a few of her letters published on another site and the letters was pretty much the same. After that I started to look into it deeper and realized that she did fool other's in the past but for some reason she's very rarely in those "black lists", I just found her on 1 list that was published February 2005. She have used different names as Natasha, Natalia, Natalka, Tasha, Nataly and the last names Kossova and Kosova. Relatives that she's been mention in the letters are her father Sergey, her mother Elena, grandmother Raya and younger sister Tania.

Emails from Natalia Kossova to Ivan (Sweden)
Dearest ,
I was so excited to receive your letter – like a child at Christmas waiting to unwrap his presents! If I feel this excited at your letters I cannot begin to think how I would feel in those moments just before we see each other face to face! I am such a romantic dreamer and can’t help but let my mind wonder how it would feel to have you by my side. Always. :)
Figuratively speaking, sorry to say, I know we will sometimes need to part, but I know that we will be on each other's mind. Always. :)
It is a dream that becomes more real for me with every letter I receive from you.
Honey I understand why you would like to quit drinking coffee, it really is not very useful especially if you drink it way too much. I agree with your idea honey that it's very boring to cook something good for only yourself, i am that way too, I dream that one day I manage to show all my cooking talents to my special man, hopefully you will be able to ******** dishes one day honey and i will be happy if since that time the food that you eat will not irritate your mother any more:))
Don't you think that so often it is the simple things a person does that makes you fall in love with him – the way you feel doing the most innocent everyday things suddenly becomes so exciting. I imagined walking arm in arm with you along some busy street,
and I imagined how great I would feel as all people turn their heads to look at us! I imagine cooking together, shopping together, dancing t
Read more