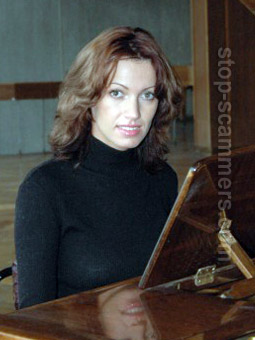 REPORT N1 (added on April, 26, 2006)
Randy (USA)
This is by far the best orchestrated scam yet of some I have reported!! Voly had her passport, visa and tickets already payed for and was coming to Miami. She was moving here to become a teaching Nanny as a pianist and had 5 interviews set up thru an agency locally in Miami.
I had spoken with her 5 times at her Grandmother Alexandra's apartment in Brest, Belarus (011.375.29.263.5825) on saturday's ONLY.
She had all her things packed up and moved to her Grandmothers from Minsk too Brest. Voly then borrowed a friends car to drive too Lipovka to see her other Grandmother Tatsiana. Unfortunatrly she had a car accident there that was her fault. The BMW she hit had $1,300.00 USD dmage. She had $500.00 to pay but was short $800.00.
If I did not send her $800.00 via Western Union her trip would be cancelled and we would not be together. I saved only this document as her flight details were there. I can fax you copies of the E-mail I printed asking for the money. Please advise.
This woman had every detail extremely well orchestrated, including the truck driver to pick up her things for the move!! She will definetly scam several people as she is one of the few that gets you to call her on a phone frequently, and is extremely well detailed telling you everything.
After I did not send her the money, the daily E-mails stopped. I then called the number at her Grandmother's................yes you guessed it, the number was disconnected. She never had a phone at her apartment in Minsk, we could only talk when she went to Brest by train on the weekends on her Grandmother's phone.
Her initial E-mail was "roses4me132@match.com", which does not exist anymore. I also saw her at volly7711@yahoo.com.
Her Grandmother Alexandra's address is; Prospect Masherova, d.8, kv.19, Brest, Belarus.
Please add her to Stop Scammers.
Thank You,
Created: 2006-05-04    Last updated: 2006-05-04    Views: 1425