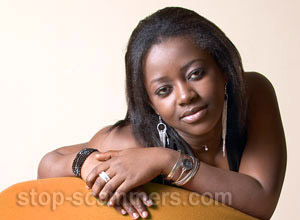 REPORT N1 (added on June, 6, 2006)
Jeremy (Canada)
Just got several letters form her told her she was a scam an got the rest of the documents.

Emails from Mariam Murphy to Jeremy (Canada)
Dearest Beloved One
Many thanks for your understanding, I appreciate your kind gesture to find time to chat with me.First and foremost and brief self introduction,I am Mariam Murphy,23years old and the only daughter of my late parents Mr.and Mrs. Murphy.
My father was a highly reputable busnness magnate-(a cocoa merchant)who operated in the capital of Ivory coast during his days It is sad to say that he passed away mysteriously in France during one of his business trips abroad year 12th.Feb. 2003.Though his sudden death was linked or rather suspected to have been masterminded by an uncle of his who travelled with him at that time.But God knows the truth!
My mother died when I was just 11 years old,and since then my father took me so special. Before his death on Febuary 12 2003 he called the secretary who accompanied him to the hospital and told her that he had a sum of $2.5 million US DOLLARS (two million five hundred thousand USD)deposited in a suspence account with one of the local banks here in Abidjan, Ivory Coast.
He also said he used my name to Deposit the fund with the bank as his only daughter, as well as the next of kin to the fund. He also explained to me that it was because of this wealth that he was poisoned by his business assocaites, That I should seek for a foreign partner in a country of my choice where I will transfer this money to and use it for investment purposes.
I want you to assist me in clearing this fund into your account over
Read more