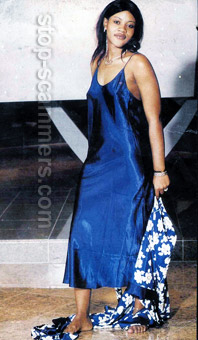 REPORT N1 (added on June, 16, 2006)
Abhishek (India)
The Scammer has registered his name on Indian Matrimony site named Bharatmatrimony as a paid member and her matrimony ID is T534138. She has expressed her interest in me and in respose i sent her a mail. In the mean time i inquired about the genuineness of above matrimony ID and site authorities has intimated me that the ID has been suspended due to some suspicious activities. I got two mails from the scammer and she told me that her parents are dead and she is having an amount of $10 M in a bank. She asked for some help to me in managing this fund. I serched the name 'Jennifer Marthins' on the net and i foud it there in scammers list. I also got her picture there. In my next mail I asked for picture from the scammer and i got a picture which was totally different from that one i found earlier in a scam report. She has given me contact address and number of her attorney which was partially resembling with those mostly used by african scammers.

Romance scam letter(s) from Jennifer Marthins to Abhishek (India)
I'am Jennifer Marthins,I saw your profile and decide to write you,you looking nices and honest man I have something important to discouse with you feel free thank's MY MAIL ADDRESS jennifermarthins24@yahoo.fr pls get back to me through this email address thank

Dearest one,
Thank you for your commited zeal and sincere introduction of yourself in my personal e-mail address as it is requested by me. First and foremost and brief self introduction, I am Jennifer Mathins 23years old and the only daughter of my late parents Mr & Mrs Mathins My father was a highly reputable business magnate (A cocoa merchant) who operated in the capital of Ivory coast during his days, It is sad to say that he passed away mysteriously in the hospital after being diagnose of food poison when he returned from one of his business trip to France on 12Th.Feb. 2003.Though his sudden death was linked or rather suspected to have been masterminded by an uncle of his who travelled with him at that time.But God knows the truth!
My mother died when I was just 11 years old,and since then my father was taking care of me since my mother died, since then i was like a special daugther from my dad been the only child. My dad died later on June 12 2003, he called me secretly to reveal the key to his personal safe where he kept his documents of the ligament of the sum of $10.5 million US DOLLARS (Ten Million five hundred thousand USD) deposited in a suspense account in one of
Read more