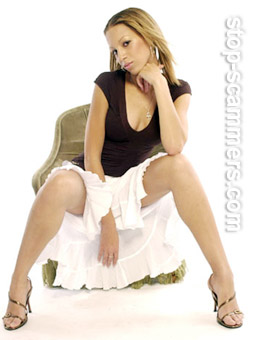 REPORT N1 (added on June, 20, 2006)
Michael (Spain)
This lady contacted me on CupidBay and I began writing. At first she purported to be in Kent, UK but would not give me any address or area. This was in April 2006. Told me her father was dead and worked with mother-in-law in the family computer shop business. Beginning of May told me she had to go to Nigeria. After a couple of conversations she asked me if I would cash some travellers cheques for her. They were in a company name but was money owed to her. I told her to cash them herself. She said she was unable but I would pay for her fare to come back to the UK she would then cash them there. At this point she told me that she needed the money for her father who was critically ill in hospital. (Somehow had forgot that she had previously told me he was dead!)
She asked for ?700 pounds, but I told her that the fare to Nigeria was only about ?500 and I offered to pay myself on my credit card. This was no good, she wanted the cash sent by Western Union to pay for the ticket there. I attempted to haggle with her and she said that ?200 would do and she would borrow the rest. By now she was promising her undying love for me and wanted me to look after her for the rest of her life!!. I had previously told her that I was considerably older than her, but this did not matter. She is still trying to get me to send money to this day, with promises of love etc when we get together in the UK. All these conversations are done on Yahoo Messenger, the only emails I have are her giving me her address and one other, the address of a purported travel agent.
Created: 2006-06-20    Last updated: 2006-06-20    Views: 1254