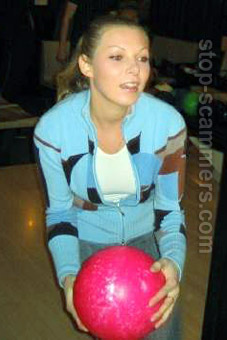 REPORT N1 (added on June, 23, 2006)
Robert (USA)
I was contacted by her originally on Lovehappens, as Laura. She then gave me her yahoo email adress. She then admitted that her real name was Olga, no last name given. Later she told me that she was from Ryazan. A couple of months went by and then she started talking about visiting me in California, she didn't ask for money at first, but then later said that the visa would be $400.00. She then said that she would need another $2,000.00 for the tickets. I broke contact with her after she started talking about needing money. She would always send pictures with her emails. Her emails were not form letters, and her English is decent to some broken/mispelled words. She would answer some of my questions and concerns, but mostly just went on about looking for a decent man.
REPORT N2 (added on September, 12, 2006)
Tony (USA)
This one is a new face,very smooth,writes everyday,about love,family and coming to America. Describes men in Russia are alcoholics,criminals abd rude. She will tell you rowards the end sge has $600 dollars and only needs $1300 dollare to have airfare. She also will write very ****** letters as you correspond with this person.
Created: 2006-06-23    Last updated: 2006-09-12    Views: 1165