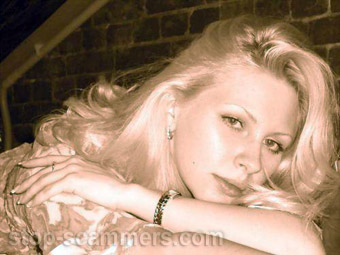 REPORT N1 (added on July, 12, 2006)
S. H. (USA)
She wrote me. Same usual boring dialogue in letters. Leads up to her wanting to come to me, typical visa/airfare scam with details of costs. Strung the **** out for as long as I could to get information and more photos. Even sent a nice **** which I am sure was taken off internet, then complained it cost $300 to buy a digital camera to take more (so how did she get the one she sent, huh...and within a day of asking?) Does it add up? NO!
No guys again,beware these Russian beauties! Most now you find on Internet are scammers and I have exposed dozens here. My stories and experience will soon be out on www.scamhunter.net so check in another month or so!

Emails from Elena Kozlova to S. H. (USA)
Hello! It is pleasant to see your letter. Certainly I to wish to learn you it is better. Also I shall tell to you more about myself today. I wish to tell to you about my external data. Volume of a ****** of 89 sm, a waist of 60 sm, my growth of 173 sm, weight of 54 kg. I have no native brothers or sisters, and my parents were lost in autofailure when to me there were 9 years. After that I was brought up by the grandmother. I lived at it in small settlement near to the city of Krasnodar. After leaving school I have acted to study in medical institute, and then two years in postgraduate study. And after that I have started to work in clinic independently. In settlement where there lived the grandmother there is no hospital, and only the small medical aid station in which works two doctors. And consequently I had to search for employment in Krasnodar. I have gone to work in the Krasnodar hospital and I work here till now. As I already have told earlier I am engaged in treatment of patients in-home. Basically it is children. I like to help to them, and in general I to love the work. I live in an apartment which I rent in silent area of city. My city big,
its population more than 600 thousand person. And in which you live how much big city? The grandmother has left on a next world two years ago and after that I have remained absolutely alone. There are certainly girlfriends. And in the days off we meet, and we go together on a concert or simply we walk on city
Read more