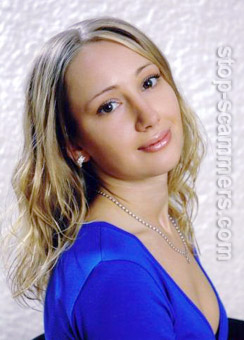 REPORT N1 (added on July, 12, 2006)
Jan (Belgium)
This started pretty normal, she was a paying member of a dating site, and contacted me first, then we wrote from time to time mails, she did sent pictures, but ofcourse never really answered my questions.
She felt in love after a few weeks, she's very patient, and doesn't insist on coming to you/me. But iventually, when she wants to come to visit you/me, she asks for money or help in the payements and because I refused to help to pay her visum/visa and other stuff, she first said, that she was going to save everything she earned, then after a few days she said I didn't trust her because I didn't wanted to help her financially, she also called once, sounded pretty real. After I refused for the second time to sent money or helping her to pay the travel costs, before she got here, she dissapeared.
-She said she worked, but coming to here for 2 months wasn't going to be a problem!
-She said she didn't have a phone, because she didn't have the money for it, but where in the **** came that phone from, with a private number??
To much things werent right, she doesn't always makes the mistake of only once putting your name in the mails, but she copied-paste the name, I could see that because there was always a small spelling mistake in the sentence after my name.
Even if you write some things in russian, she didn't react...
REPORT N2 (added on September, 7, 2006)
Steven (Belgium)
This girl finds you on datingsites, then you start contact her, she falls in love very fast. After some mails she starts talking about visiting you but she hasn't got the money for international passport and visa. She is willing to arrange it all for you, just send money with Western Union. She also asks your phonenumber and adress, shortly after you get an anounimus phonecall.

Emails from Elena Ryabinina to Jan (Belgium)
Hi my new friend!
You really seem to be just exactly the type of man that I have been hoping to meet;Please tell me more about yourself,your interests. My name is Elena .I live in Russia, in city of Cheboksary. My age of 26 years I am the serious girl, I want to get acquainted with the good person who will concern carefully to me and will love me up to the end of life! For me main is heart of the person! I have correct and romantic character! I like to dream of the beautiful future with the person of my dream! I like camping and travel at free time with friends .If you liked myprofile write on E-mail lenusya26@bk.ru and I will send my photo .I shall hope that my letter was not vain and you write to me the return letter. Elena