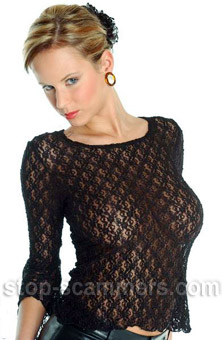 REPORT N1 (added on July, 12, 2006)
S. H. (USA)
Again contacted from the popular scam haven website Atareks. These guys really encourage scammers to post and do hardly nothing to delete such profiles from their sites even when presented with factual evidence. It is just a money making machine for the owners for anyone ****** enough to pay for their service. I have even been banned from posting from their site because I have exposed so many Russian ***** there.
Check this girls photos out, it is a clear sign of a scammer. Remember, if it looks like it came out of a magazine, it probably did. I asked her for some amatuer photos but this is all she would send. I have seen them around before on the Internet.
Guys, as always, just use common sense when writing to any foreign woman. don;t let **** photos, letters of love and promises of arrival to you cloud your judgment. It's OK to play their game and get photos and such, but NEVER send them money until you are as confident as you can be they really are who they say they are. It took me five years of exposing scammers and over thousands of letters to finally find a real Lady! And guys, my fiancee is the hottest **** you could ever want.

Emails from Natalia Rumar to S. H. (USA)
Hello ,
I am very glad, that you have found time to answer my letter. For the beginning our acquaintance I shall tell to you more about myself. I was born in the city of Simferopol of Republic of Crimea in the country Ukraine. Since old years Crimea to be glorified by the wines and resorts, such as Yalta. Crimea is the peninsula, surrounded with Black sea. This city is no difficult for finding on a card, Simferopol, its population is made about one million by person .
I work in our city in hospital as the dantist. Before it I have finished Medical Institute of the city of Simferopol and have received higher education. I work 9 hours per day, but my work very much to like me. I after work have time that I carried out it with girlfriends. I do not drink alcohol in general and I do not smoke. I try to support a healthy way of life and it to like me. In rainy, boring evenings I like to spend reading the book or listening to music. In music I love everything, but I give preference classical or a jazz. I live one in an one-room apartment but I have the grandmother, mum of my mum who lives in Settlement.
I do not want that my husband Ukraine the man was, Because they frequently drink alcohol and do not respect the wives and frequently address with wives roughly. In free time from work I prefer to walk with girlfriends in park on new fresh air. Also I like to prepare various tasty dishes because Russian and Ukrainian kitchen is very various and in a special w
Read more