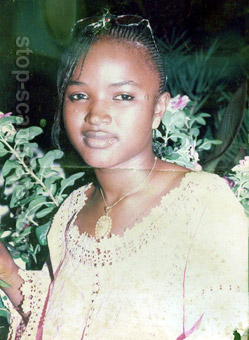 REPORT N1 (added on July, 20, 2006)
Lammert (Thailand)
Come with story her father late
Major General Glay of Liberia.
Refugee Ghana. After father die go to Mali. Father deposit money. But need help to can have that money.I help but she would pay back. No It is a big scam. With Laywers,Security Company, Courier Service. I know they still try by other. Pictures change every time. She use only datingservices to cantact men. But they clever difficult to can catch by law.

Emails from Linda Glay to Lammert (Thailand)
Sir,
The contents of your mail are very well understood , however we are security company that have been operating for so long a time now and part of our principle is that we do not allow sentiments to becloud our modus operandi.
You will also agree with me that the consignment you talked about has been in our custody for a long time now without our charges being attended to ! this in itself is a bad precedent in our code of operating. Be that as it may, we have allowed more time for her until now.
It is pertinent to quickly mention at this juncture that a meeting was held recently on her case and it was generally accepted that the office of the director should confiscate the consignment! that was when you automatically showed up and immediately another meeting was conveyed where the director pleaded on her/your behalf for some time to allow us know your position on the issue as you really seem serious to assisting her, we do believe that this trend still remains as time is not in her/your favour at all.
Concerning the contents of the box , we will reiterate here that as a security company we however do not demand to see the content as we always tell our clients to seal their boxes before we eventually seal it in our vault, this way everybody is safe .However from records, the late Alfred T. Glay declared the contents as Diamond Jewelries.
Sir, we thank you for your efforts but as a company with high professionalism , we do not compel our clients to p
Read more