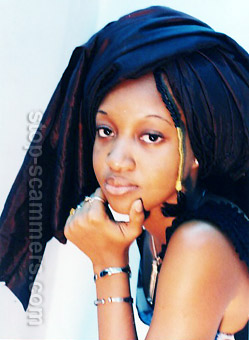 REPORT N1 (added on July, 20, 2006)
Robert (USA)
Dear Stopscammers,
Here is another scammer we found on our site and moved to our black list. It is a typical nigerian scam. Who knew there were so many millionairs in West Africa!
REPORT N2 (added on March, 14, 2008)
Grant (Canada)
This person contacted me aked me to help her with 9 million dollars,asked me for my bank account info...i dont think so...

I want to explain and review my predicament to you, My father was a highly reputable business man (a cocoa merchant and suppulier of agro allied material ) who operated in the capital of Ivory coast during his days. It is sad tsay that he passed away mysteriously in France during one of his business trips abroad in february last year.

Though his sudden death was linked or rather suspected to have been masterminded by my uncle who travelled with him at that time. But God knows the truth! My mother died when I was just 4 years old, and since then my father took me so special. Before his death on february last year, he told me about a box he concealed the sum of Eight million, Five hundred thousand United State Dollars.(USD$8.500,000) deposited in one of the security company's here in Abidjan Ivory coast

West Africa, which he disguised and declared the box to contain family valuables instead of money, by this way the company does not know the true content of the box and He registered the consignment using the name of beneficiary or next of kin to be his business forighn partner living overseas. I have in my possesion the deposit document which the company gave to my late father when he deposited the box with the security company. I really don't know what to do. This is because I have suffered a lot of set backs as a result of incessant po
Read more