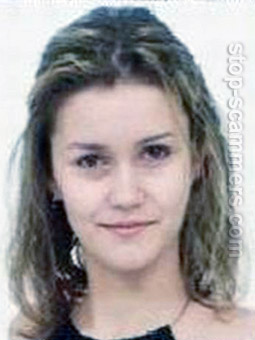 REPORT N1 (added on September, 8, 2006)
Jone (Finland)
Airfair scam.
This scammer asked me 120$ for a flight ticket because we were supposet
to meet in Russia. About 100 Very gentle letters during half a year.
She did not come to the meeting but kept the money.

Romance scam letter(s) from Evgenia Podoplelova to Jone (Finland)
Hi
Excuse me, but I was late aboard the plane. When I said goodbye about the mum that her it became bad both she has fainted also to me it was necessary to bring to her for a long time. When mum has come to feeling I have taken a taxi and has gone to the airport. But registration and my plane already has already passed was in the sky. I have run in a registration table and to me have told, that any more than cannot help me and that my ticket is not valid and can only suggest to buy to me the ticket on other flight I so strongly has begun to cry that to me who could not than to help.
There was such coincidence of circumstances that I now have remained here.
I as asked all phone and when learned that it is number of Finland to me refused in telephone conversation.
I have again arrived home and my mum began to calm me.
She has told that all will be good. You only stay there and as you will see my letter urgently write. In fact planes fly every day.
I want you to ask once again to me to help.
In fact you understand that to me to not buy one this ticket.
You can to me as to send the same company that is the western union.
Then I there and then buy the ticket and the same day I fly to you. And you meet me And we carry out this time with you in that strange hotels that you for us have removed.
I understand, that all has left not well you understand that I could not risk health of mum.
So do not hold on me it is angry.
I in fact on former want a meet
Read more