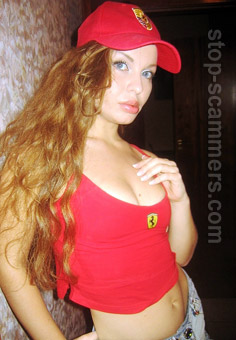 REPORT N1 (added on September, 27, 2006)
Russell (Canada)
Seldom answered my questions. Took about fifteen letters before money was asked for. Then I started to have fun with her. Then travel agent account numbers for a transfer. Then guilt. I told her I was coming to meet her and things cooled off fast.
REPORT N2 (added on October, 17, 2006)
Kory (England)
Exchanged letters frequently. Sometimes they answered my questions, sometimes not. Eventually the whole money thing came up. I could afford to lose the $1130 requested, so it was not big deal to see if it was genuine. Then of course came the visa issue and suddenly she was asking for another $5000! /Needless to say I told her where to stick it, but had some fun doing it:)

Emails from Ekaterina Shirmanova to Russell (Canada)
Hello Russ It is very pleasant for me see your letter today. I am very glad this. Today in our city very good weather as shines the sun and in the street it is very good and is warm. And how you? I think that all well?. You imagine when I went in the Internet of cafe there were very strong rains. It was the thunder-storm. I do not know why but recently at us is constant it is raining. And it occurs very unexpectedly. I want tell you that today I looked very interesting film. I very much liked it. I looked film with participation of very known foreign actors. This film refers " Severe games ". You looked this film? I want to tell you that I very much liked it because I was delighted really simply. But if that is fairly to me it was not pleasant as this film comes to an end. Because there the main actor perishes under machine. I as want tell you that I very much like films where there is a love, relations, pride, and romanticism. I shall tell that this film rather youth. Also all feelings of people are there very strongly expressed. This film I looked on one breath. After we have looked film. I and my girlfriend have gone her and have made many photos on a videocamera. It was very interesting and attractive. We with my girlfriend have made very frank photos. But I think that you understand me. To me like be photographed. I very much love make a photo. Because it is memory and it is possible when I shall be old. I shall recollect it with the great pleasure an
Read more

Emails from Ekaterina Shirmanova to Kory (England)
Hello my dear Kory. Now as you probably already guess I write the letter to you from Moscow. Now I am in Moscow now at us 10 hours of 25 minutes. I have arrived to Moscow today in 7 o'clock in the morning and I at once have gone to embassy to make documents I at all do not eat that. Kory I do not know as to tell to you it. But when I have found out that to me have told in embassy I was simply in a shock. I am very much upset with it. Because to me not that did not speak in travel agency. Kory I do not know as to inform you it. Now I sit in the Internet of cafe and I write to you the letter from city unfamiliar to me. Kory I shall not hide from you it and I have decided to inform you about it more likely because we still had 3 days. Kory to me have told in embassy that I go abroad for the first time and as the tourist. I very much was delighted it. Then to me have told that my visa will consist for 50 days. That is under this visa I can arrive in your country of exactly 50 days. Kory but that I have found out am farther that I simply was in a shock. To me have told that per every day which is designated in the visa to me it is necessary to have 100 $. You understand it? Kory I have been very much surprised but to me have shown the document confirming it. But I go to you for 50 days and it means that is necessary for me approximately 5000 $ You imagine what it is the sum? To me have told in embassy that I need to show them this sum. To me have told that I sh
Read more