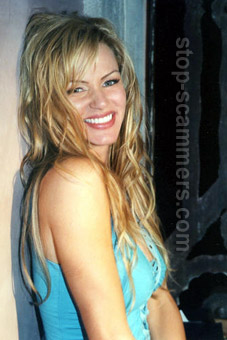 REPORT N1 (added on October, 27, 2006)
Alan (UK)
Was again on Myspace and saw a photo of a ****, and automatically I thought scammer. I wrote to her, deciding to play her at her own game. Her story was differnt to what the previous scammer had told but I knew all along it a scam. Received a few letters saying the usual stuff and some photos which looked a little like the girl I had written to previous.
Then she gave me her address and it was exactly the same as the previous girls, and the next couple of photos she sent weren't just similsr looking to the earlier girl 9Oksana) but were without a doubt the same girl. I knew it was coming and then I got the letter expressing her undying love but she would have to stop writing as it too expensive for her. Instead of writing offering to help as she hoped, I wrote asking who should I make the payment out to, Olga or Oksana and that I knew all the time it was her! Still awaitinga response, doubt I'll get one but who knows!

Romance scam letter(s) from Olga Onischenko to Alan (UK)
It's really great that we meet?!! You probably would be interested: why a woman of my age is searching her love through the net?I am a grown-up,but in my heart I am still a young girl who believes in love stories and who still hopes to find her fate. I was trying to find my love here in Ukraine, but it didn't work out. I was desperate... I have lost hope the main thing that keeps us going. Time was passing - I was alone. I have read in a magazine that there is a such thing like net meeting of people, and thought why not to try?
I'm sure that you would like to know more about me...If you do here is the story of life. My name is Olga, but all my friends call me Olya, which name do you like more? I don't know where I was born, but one women brought me at the orphan's home when I was about 2 months old and she told the nurses that I was born on the 22nd of November 1978. When I was 7 years old a family took me to be their child, those years of my childhood will be always in my mind. Now I have a one dream for all children to have loving and caring parents. So I was lucky to have such a family. I was growing up as a real member of the family and have my youngest sister, her name is Lena. We used to live in the country and always have too much work to do and no time for enjoying life with other children. Later I graduated from the technical school and got married, he was very handsome young solder and I felt in love, i was bl
Read more